Team USA gold medal sweep? What you missed overnight at the Olympics 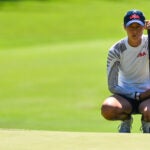 Nelly Korda's worst round was a lot like Xander Schauffele's: still really good.

An American sweep of the golfing gold medals at the Tokyo Olympics now feels imminent. Nelly Korda will take a three-shot lead into the final round in Japan, and will look to set scoring records in the process.

Korda’s competition has played out somewhat similar to Xander Schauffele’s, oddly enough, with two solid rounds bookending one extremely low round through 54 holes. Her second round Thursday was as close as you can get to shooting 59, but still shooting 62. She followed that with her worst round of the week, a 69 Friday, reiterating that someone is going to have to go out and steal it from her. If the worst round of your week is a 69, you’re playing some great golf. Schauffele’s worst round was a 68, which he shot twice. Anything worse than that and he would have been in a playoff for the gold.

Back to Korda, the potential player of the year on the LPGA Tour. She seemed as comfortable as could be during her opening nine Friday, making three birdies through the first six holes, but a slight stumble on the par-5 8th, where she made bogey, was the last real significant result of her round. She made 10 pars coming in, losing strokes to the field on the greens and on approach shots.

“That’s the thing about golf,” she said afterward. “Once you get a little too comfortable it humbles you when you start making mistakes and you get ahead of yourself.”

She’s not wrong. Korda holds a three-shot lead over Indian upstart Aditi Ashok, who has made just three bogeys all week. She has wowed NBC broadcasters with her putting all week, and the statistics back it up. She’s gained nine shots on the field with her putter alone, helping to offset her below average distance off the tee. She’s made five birdies each round at Kasumigaseki, but it might take more than that to take the top spot on the podium away from Korda.

Lydia Ko looking for another medal

The three medalists from the 2016 women’s competition in Rio all played together for the opening two rounds in Japan, and Lydia Ko elevated herself as the one with the best chance of getting back on the podium. Ko’s third-round 66 was one of the rounds of the day and pushed her into a tie for third place with three others.

She might not be able to snag a gold medal like she had hoped, but two silvers, or just two medals in general would be something no one else in golf has been able to do since the sport rejoined the Games. When asked if she has a chance to take the top spot, she looked back to last month’s Evian Championship. “I mean, Minjee [Lee] proved that you can be 10 shots behind and win a major championship,” Ko said. “That’s the crazy thing about golf that you never know until that last putt drops on the last hole.”

Members of the International Golf Federation’s event staff have been stewing for days about the possibility that the women’s event might get cut to 54 holes. Tropical Storm Mirinae has been forecasted to make landfall Saturday, meaning Kasumigaseki could see thunderstorms Saturday afternoon and evening, into Sunday. The issue is that the women’s competition needs to finish 72 holes by the time of the closing ceremony, Sunday night at 8 p.m. local time. Otherwise, it will revert to a 54-hole event.

Players were made aware of this Wednesday afternoon, and a handful of them were particularly annoyed. And rightfully so. But sometimes Mother Nature just doesn’t cooperate. Organizers have pushed up the tee times for Saturday’s final round to 6:30 a.m. local time, with players going off both sets of tees just to give them as much time as possible before the storm arrives. You can watch the leaders tee off at 7:18 p.m. ET Friday on Golf Channel.

Though Korda has distanced herself from the pack, there are multiple competitions playing out at KCC, as was the case for the men’s event. The race for silver and bronze could totally include Korda, but if not there are plenty of characters in the running. Altogether there are 15 players within three shots of the podium, which calls to mind how the men’s competition finished.

Just six days removed from a 7-way playoff for the bronze medal, it’s totally plausible we see some sort of playoff for one of the women’s medals. If Korda continues to extend her lead, the focus of the competition will turn to the remaining undecided medal places. Aggressive golf is entertaining golf! Tune in for all the action Friday night.