JERSEY CITY, N.J. — When it comes to fining PGA Tour players, Brooks Koepka has made it clear where he stands. “Figure it out and penalize somebody,” he said during Wednesday’s pre-tournament press conference. His response — echoed by Rory McIlroy — begs the question: what are the punishments for slow play on Tour, anyway?

While the Tour has a history of being tight-lipped about certain disciplinary actions, the organization’s stance on slow play is hardly a state secret. At this week’s Northern Trust, the 2018-19 PGA Tour Pace of Play Time Chart is provided to players on the first tee; one such sheet was shared with GOLF.com (pictured below). Here’s what we learned:

1. How long are groups expected to take?

2. What does it mean to be out of position?

3. When do players get timed?

Generally, a group will be warned once. After a warning, players will be individually monitored. An official will inform the group if they’re being timed. Players have 40 seconds to play each shot, or 50 seconds if they’re first to play. The Tour also seems to reserve the right to time a player whenever it deems necessary, though.

4. When do players get penalized?

This is where things get (theoretically) severe. Your first bad time is no penalty. Your second bad time is one penalty stroke. Your third bad time is two strokes — and your fourth bad time means a disqualification. It’s worth noting that this does not always happen as written.

5. What do players get fined for a bad time?

Okay, time to hit the wallet. Your first offense (“offense” meaning “bad time”) results in no fine. Second offense is a $5,000 fine. Third (and any subsequent offense) is a $10,000 fine. Again, this is only when a player is given a bad time.

6. What do players get fined for being put on the clock?

There’s no fine for being put on the clock the first nine times. The 10th time a player is put on the clock, he gets fined $25,000. Any subsequent timings after that are $5,000 fines. A player reaching that 10+ timing category will also be placed in the last grouping category for the rest of the season.

Players can appeal, but only if they do so immediately on site to the Tournament Director. You can see the complete sheet below. 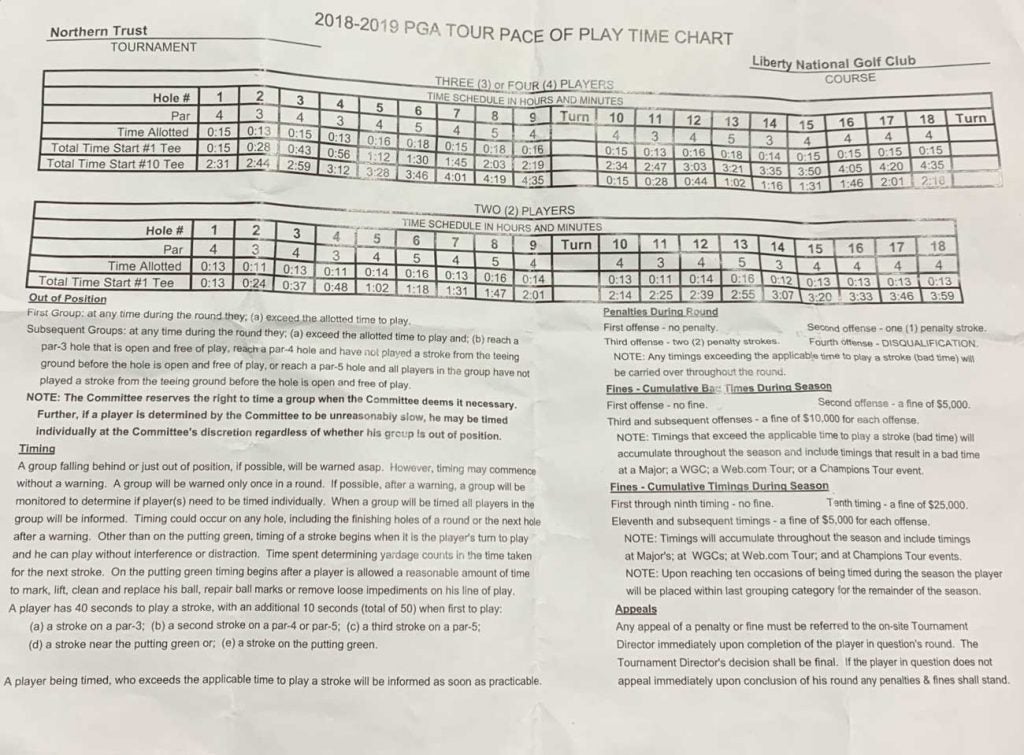