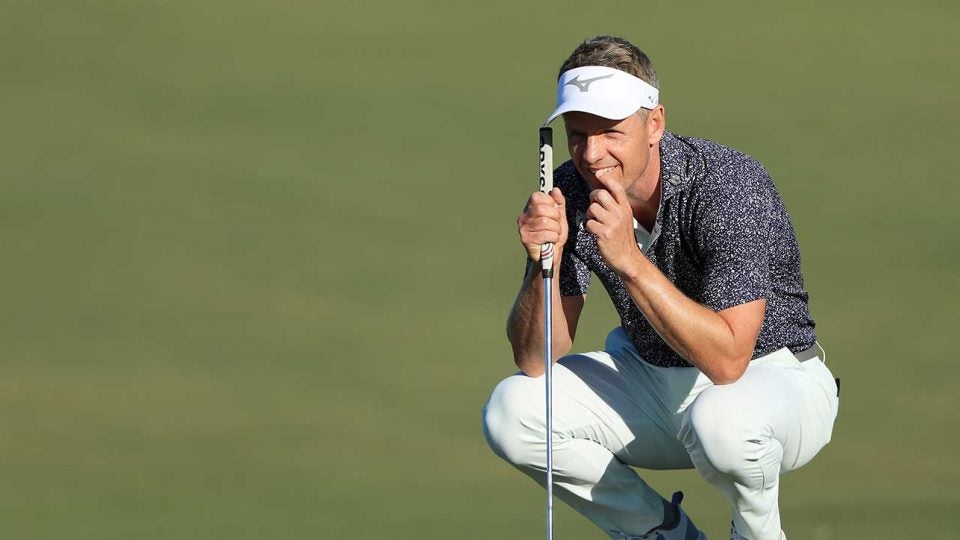 Luke Donald, not to be mistaken with his alter ego Luke McDonald, crouches for a putt on Saturday at the Honda Classic.
Getty Images

Luke Donald is, by all accounts, a tremendous golfer. The Brit has 17 professional wins, including five on the PGA Tour, and has finished in the top-10 at all four Majors. The four-time Ryder Cupper is a former World No. 1, even if his career has fallen off some recently as a result of injuries. Donald is the 2006 winner of this week’s tournament, the Honda Classic, and hails from a town in England pronounced “High WICK-come.”

Luke McDonald? Well, we don’t know much about him. All we do know is that he miraculously rewrote the history books en route to winning the 2016 Honda Classic (sorry, Adam Scott) and he hails from a town pronounced “High WHY-comb.”

The problem, it appears, is that Luke McDonald doesn’t exist. His 2016 Honda Classic win doesn’t exist. Nor does a town pronounced “High WHY-comb.” Rather, in an incredible, almost unbelievable accident, the first-tee announcer on Saturday at the Honda Classic jumbled all of these facts about Donald, right down to the name. See for yourself.

The job of the first-tee announcer is simple but critical, as yesterday’s participant learned the hard way. The moment—while certainly cringe-worthy—can probably be chalked up to a nightmarish accident. A mistake that happened in an instant after hours of reading notecards with names, accomplishments and hometowns.

Other than pronouncing my hometown wrong, getting the year I won The Honda incorrect & getting my name wrong, the announcer nailed it!!! 🤣🤣🤣 . 2 back heading into Sunday & in a great position. Thanks for all the support out there, loving it #Honda #HighWhycombe #2006champ #CallmeRonald #0for3 🍟🍔

The good news? Donald’s position on the leaderboard (tied for third at 3 under) means he’ll be teeing off late, leaving plenty of time for Sunday’s first-tee announcer to practice.

For now, we’ll be mourning the brief career of Luke McDonald. Indeed, the flame that burns brightest burns fastest.