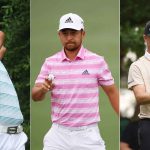 Saturday at the Masters was a Moving Day to remember, with some players surging and others fizzling. Sunday’s action is sure to be no different. Here are five things you need to know ahead of Sunday’s final round at Augusta National.

Matsuyama will be playing with the weight of a nation on his shoulders on Sunday, as he attempts to become the first men’s major champion ever from Japan. But if he can tap into the momentum he showcased on Saturday afternoon, it may just be a runaway victory.

Matsuyama was seven under on his final 12 holes on Saturday, and was bogey-free for the entirety of the third round. His seven-under 65 was also the lowest round of the day by a whopping three shots. He’s now 11-under overall, and leads the field by four shots.

Four players are tied for second

Justin Rose, the 36-hole leader, fired another even-par round of 72 on Saturday to remain at seven under overall. He ceded his lead to a surging Matsuyama, but he’s certainly not out of it. Also only four shots back: Marc Leishman, Xander Schauffele and Will Zalatoris.

Jordan Spieth fired a third round of even par on Saturday, leaving him at five under overall, and six shots behind Matsuyama’s lead. While a win on Sunday might seem like a long shot, there is historical precedent for such a comeback.

Back in 1956, Jack Burke Jr. made up an eight-shot deficit to win, while Nick Faldo came from six shots back to beat Greg Norman in 1996.

Dangerous weather prompted an hour-long delay in play on Saturday, but luckily, the Sunday forecast looks good. Temperatures are expected to remain in the 70s all day with moderate winds of about 12-13 mph.

The options are numerous!

Hideki Matsuyama becomes the first major champion ever from Japan. Jordan Spieth overcomes a six-shot deficit to win his second Masters, and fourth career major. Justin Rose rallies to win his first Masters and second career major. Twenty-four-year-old Masters debutant Will Zalatoris becomes only the second player in history to win the Masters in his first appearance.

The list goes on! Regardless of what transpires, there’s nothing like Masters Sunday. And that alone makes the final round worth watching.