Still waiting for your first hole-in-one? This New Jersey golfer born without hands just made his second 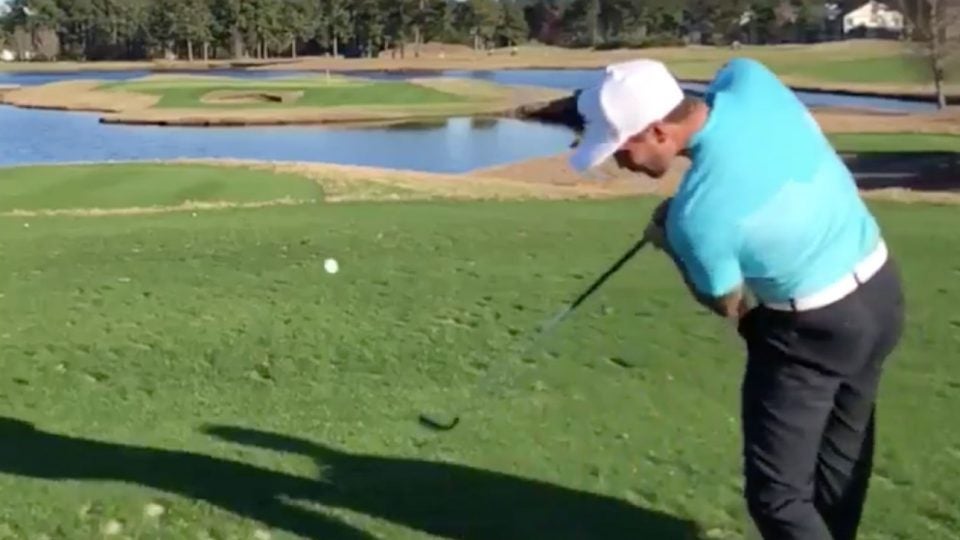 Brandon Canesi, a 26-year-old from Atlantic City, N.J., was born without hands but with a ton of heart. Introduced to golf when he was 6, he was smitten with the game and developed a swing that was all his own.

Late last Tuesday afternoon Brandon Canesi made a hole-in-one, and like the number on his scorecard, the story behind it is hard to beat.

Canesi, a 26-year-old from Atlantic City, N.J., was born without hands but with a ton of heart. Introduced to golf when he was 6, he was smitten with the game and developed a swing that was all his own.

“I never had any doubt that I was going to be a golfer,” Canesi says. “But that’s how I’ve been with everything in my life. It’s like the Nike slogan, Just do it. I never look at life any other way.”

When Canesi was in high school, and increasingly committed to the game, his uncle built him a set of custom clubs, with extended graphite shafts and modified grips. Canesi, a lefty, anchors the shaft under his right arm and holds the grip in his left palm with the nub of his right hand resting in front. He plays to a 13 index.

But golf is more than a hobby for him.

In 2016, Canesi founded Hole High, an organization that raises money in support of adaptive golfers. He is in talks with The First Tee about establishing a chapter in his hometown. His message to kids with disabilities is one he lives: Don’t let physical challenges stand in your way.

Two months ago, Canesi enrolled in the Golf Academy of America in Myrtle Beach, where he is studying golf management and operations, and playing several times a week.

On Feb. 27, Canesi lit out with three other golf academy students for a round at the Wizard Golf Club in Conway, S.C. One of his playing partners stopped after nine holes, which was his loss. He missed what happened on the island-green par-3 17th.

With one of his buddies filming on his mobile phone, Canesi played a 7-iron from 150 yards, a lazy draw into a light breeze to a front-right pin that landed softly and rolled into the jar.

There are no pictures on the scorecard, but the video of Canesi’s shot and his reaction is worth a look (please excuse the profanity, Canesi says; he and his pals were excited).

This was Canesi’s second hole-in-one (he made an ace last year with a 5-wood from 190 yards at a course in New Jersey), but it was every bit as thrilling as the first.

“One of the kids was underage, so I gave him a choice of soda or warm milk,” Canesi says.

A special day, no doubt. But looking back, Canesi says, it was, in many ways, a lot like many others on the course.

“On the front nine, I played another par-3 from pretty much the same distance, and I shanked it and made 6,” Canesi says. “That’s just golf. Things happen. You just have to keep your head up. Patience and effort. That’s what it’s all about.”