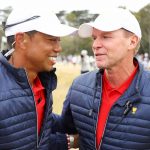 Although Tiger Woods is far from a guarantee for being at the Ryder Cup in September, Steve Stricker indicated he is involved in preparations for the event.

Tiger Woods won’t tee it up in a professional golf tournament for the foreseeable future, but the prospect of him serving as a vice captain for the U.S. Ryder Cup this team is still very much in play.

U.S. captain Steve Stricker indicated to the media ahead of the PGA Championship that he has spoken with Woods about Ryder Cup preparations as he recovers from injuries sustained in a car accident in February.

“I’ve talked to him, [but] I don’t know if we are there yet to commit to him being there,” Stricker said. “He’s still got a lot going on and his spirits are great, though. … We were on a Zoom call with him just this last week and he seems like he’s in a better place.”

Although it’s too early to say if the 15-time major winner’s health will allow him to be present at Whistling Straits in September, Stricker would love to have Woods as a vice captain. Woods served as one of Stricker’s assistant captains at the 2017 Presidents Cup and then served as a playing captain at the 2019 competition in Australia.

“I’d love to have him there,” Stricker said. “Who wouldn’t, right? The guys really respect him, and he did a great job obviously as a captain, but he was an assistant captain of mine in 2017 of the Presidents Cup and he was unbelievable. He would do anything for you, and he’s totally, totally vested in the situation and the process.”

There has been little public information since February from Woods’ camp on his recovery as he heals from the single-car accident in California. However, Woods did post a photo on Instagram three weeks ago of himself standing on crutches alongside his dog.

“One thing JT told me, he went over pretty much after [Woods] got back from L.A. and JT told me, ‘Honestly, he was a lot better than I expected,’” Fowler said earlier this month. “So that was good to hear.”

Stricker has already named three assistant captains for the Ryder Cup in Davis Love III, Zach Johnson and Jim Furyk, and it is likely he will add more.

“[Woods said] ‘I don’t know if I can be there or not, but you know I’m here for you all the way up to the Ryder Cup,’” Stricker said. “That shows his level of commitment to me to the team and his desire to be there if he can be.”

The Ryder Cup is scheduled for Sept. 24-26 at Whistling Straits in Sheboygan, Wisc.