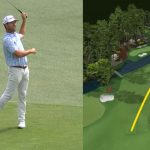 Robert Streb's tee shot at the par-3 12th on Thursday.

How many times have we seen it at the devilish 12th?

There was Arnold Palmer, in 1959, knocking two tee balls into Rae’s Creek on his way to a triple-bogey 6 that cost him the green jacket. There was Tom Weiskopf, in 1980, rinsing five balls at 12, resulting in a 13 — yes, 10 over. And then, more fresh in our memory banks, there was Jordan Spieth’s stunning quad in 2016 and Tiger’s 10 just five months ago.

There also have been shots that haven’t even reached the water.

Like Jack Nicklaus’s tee ball, in the final round in 1964, that shot so far right off his clubface that it missed the creek entirely. “Good gravy!” cried the announcer on the highlight reel from that round. “That’s unbelievable! He shanked that shot!”

At virtually every Masters, it seems, we’re reminded of what the cold-sweats-inducing, 155-yard 12th hole can do to even the best players in the world, and it didn’t take long for that reminder to surface at this year’s edition.

In the opening round Thursday, Robert Streb stepped to the 12th tee at one over.

“Ten-fingered grip — no glove a la Fred Couples and Corey Pavin,” Trevor Immelman, the 2008 champion, said on the Masters streaming coverage. “… but look out, that one came out of the heel off the club a bit too much.”

A lot too much. The ball banana’ed hard right, into the grassy expanse that connects 12 to the par-5 13th.

Immelman paused for a beat, then added:

Credit Streb, who did just about all you can do in such a humbling moment: he shook his head and laughed it off. Streb played his second shot to the back fringe from where he needed two putts for a bogey that he’d like to forget, but probably won’t for some time.

If Streb was rattled, he didn’t show it. A hole later, he made a lovely up-and-down from off the back of the green for a birdie 4.

He signed for a three-over 75.