Major-winner shares a new theory on why bombers are thriving at U.S. Open 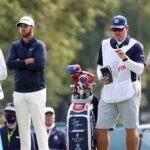 Have Bryson DeChambeau and Matthew Wolff taken advantage of an easier setup, or is it simply luck?

Matthew Wolff and Bryson DeChambeau are leading the way heading down the stretch at Winged Foot, which is a problem for the USGA.

You see, the U.S. Open is supposed to be hardest test in golf, with pinpoint accuracy and emotional mettle required to remain atop the crowded leaderboard. Winged Foot was supposed to be much too difficult for a pair of young bombers to overpower with sheer length and athleticism — its rough too thick, its greens too slippery, its challenge too great.

Yet, DeChambeau and Wolff have managed to tighten their grip on the championship with every thundering blast from the tee. Through 54 holes, the twenty-somethings made up two-thirds of the golfers left under par despite finding five combined fairways during Saturday’s third round.

What happened to the U.S. Opens of old? Where golfers who couldn’t find the fairway were toast, and where the winner married strategy with execution; not protein powder with swing speed.

It’s a question that’s met many of the game’s best players over the last four days, and many have struggled to find an honest answer. The rough isn’t any easier at Winged Foot than any other U.S. Open, they insist. And the greens, while more receptive on Thursday, have been somewhere between insane and downright diabolical (if you needed further proof, the West Course has claimed a pair of self-immolations and a withdrawal over the weekend).

Shane Lowry, who has a bit of experience in golf tournaments with penal setups, has a theory of his own. The 2019 Open Championship winner thinks DeChambeau and Wolff have managed to avoid the carnage by simply out-driving it.

“I think the long, long hitters are hitting it past where the rough has been juiced up,” Lowry said after his round Sunday. “I think if you’re out late in the afternoon the rough is going to be trampled down a little bit long, they’re hitting shorter clubs because they’re hitting it longer … Matthew Wolff, I think he’s hit 12 fairways over the first few days and he’s five under, and he only hit two yesterday and shot five under. But there’s a lot of luck involved out there.”

As far as Lowry is concerned, it doesn’t matter whether the bombers are lucky or the beneficiaries of an advantageous setup, they’re getting something he isn’t.

“It’s just so difficult out there,” he said. “I get frustrated watching the golf in the afternoon when I go home because every time I see people in the rough they’re hitting on the greens and every time I hit in the rough I can’t seem to get anywhere near the green.”

For his part, Lowry was far from the only golfer to voice his opinion on the success of longer hitters this week. On Twitter, Phil Mickelson offered his opinion that Winged Foot’s green designs birth a larger margin for error from the thick stuff.

“The front of every green is open and allows for a run up shot which is why [Winged Foot] can be played from the rough if you can get close enough to the green, and other sites which are blocked, don’t allow you to play from the rough,” he said.

Others were less convinced that long-hitting success had anything at all to do with the venue.

“It’s tricky, but I think being long on any golf course is an advantage, and I think the game has just changed,” Taylor Pendrith said. “A lot of guys are hitting it further, technology is better and people are bigger and stronger.”

Pendrith, who ranks sixth on the Korn Ferry Tour in driving distance and is likely to finish U.S. Open week third in the same category, was hesitant to attribute success at the top of the leaderboard to the strategic advantage of length.

“I wouldn’t say you’re going to win bombing and gouging,” he said. “I think you need to hit fairways here. But if you manage your game properly you need to have a good short game and you can kind of manage.”

But even if Pendrith, Lowry and Mickelson won’t admit it themselves, the top of the leaderboard does the talking for them. Whether it’s Bryson DeChambeau, Matthew Wolff or someone else who winds up on top when the dust settles at Winged Foot, the damage has already been done. While 70 years of U.S. Open champions have succeeded in avoiding punishment, a new wave of golfers has found success plowing directly through it.

All of this raises a larger question, one that the carnage-obsessed might not like the answer to: if a 7,500-yard, century-old U.S. Open track is susceptible to bombers, is there anywhere that isn’t?