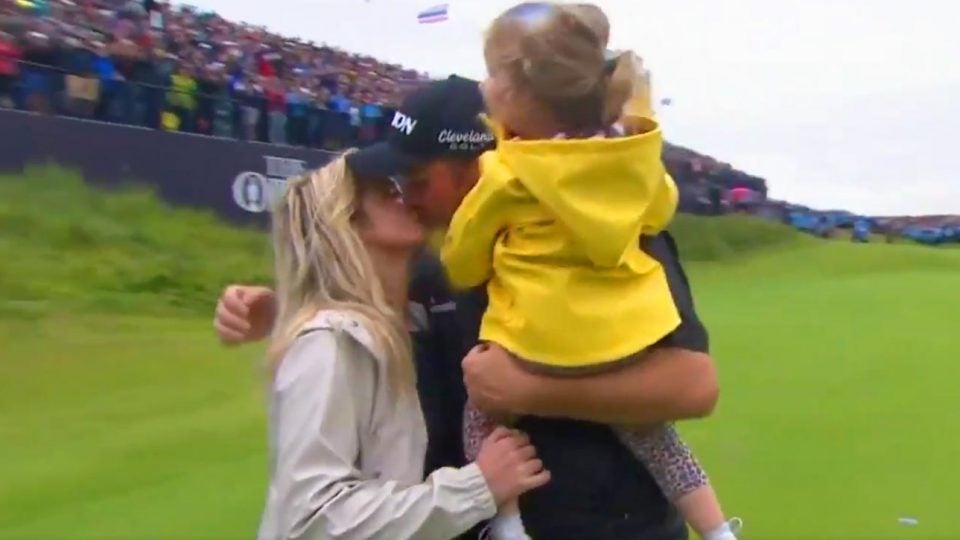 The weight of the entire island of Ireland, North and South, was on Shane Lowry’s shoulders on Sunday at the 2019 British Open. But Lowry didn’t wilt under the pressure. Instead he delivered the fans at Royal Portrush a win for the ages, and then celebrated with his wife, daughter, family, and a group of Irish pros who waited at Portrush to watch his unforgettable Open win.

Despite the four-shot lead Lowry held to begin Sunday at the British Open, the final round wasn’t exactly an all-day coronation of Ireland’s new favorite son. Lowry never lost his lead, but horrible weather and the stress of the moment resulted in a few bogeys and shaky shots.

News
‘He has united us all’: Irishman Shane Lowry delivered a performance for the ages at this historic Open

As Lowry himself confirmed after the round, the first moment he let the win wash over him was after his approach shot into the 18th green landed safely. But it was after he sank his tap-in par putt on 18 that the celebration truly began.

EVERYONE at Portrush wanted a view of Lowry winning #TheOpen 👀pic.twitter.com/ykHgcxajUL

As the putt dropped into the hole and spectators erupted around the green, Lowry raised his arms to the sky as his wife, Wendy, ran out on to the green to hug him, clutching their young daughter, Iris.

After sharing a moment with his caddie and shaking hands with competitor Tommy Fleetwood, Lowry walked briskly off the green where his mother, father, brother, sister and an assortment of other loved ones were waiting to celebrate.

But not all the people congratulating Lowry off Portrush’s 18th green were blood relatives. A group of Irish Tour pros had stayed back to watch Lowry clinch the win and to celebrate it with him. Among them were fellow major winners and good friends Graeme McDowell and Padraig Harrington.

A major victory is even sweeter when you can celebrate with family and friends on 18! pic.twitter.com/AMPgiDfUti

There is little doubt that the celebrations are just beginning, in the Lowry family and all across Northern Ireland and the Republic, and that they’ll last well into next week. But the memory of winning his first major on Irish soil with his entire family watching will last a lifetime.