‘He has united us all’: Irishman Shane Lowry delivered a performance for the ages at this historic Open

PORTRUSH, Northern Ireland — On Sunday afternoon Stewart Cink, having just finished his final round at the 148th Open, was rushing to get out of town when he stopped dead in his tracks on a bridge behind the 1st tee. “This I want to see,” said the 2009 Open champ. Shane Lowry was about to begin his fraught journey through heaving linksland, woolly weather and centuries of tortured political history. No matter who you are in the golf world, you had to stop and pay attention. Lowry’s clubhead must’ve felt like an anvil and it showed in his opening tee shot — a rope-hook that never got more than head-high and expired deep in the left rough. Cink offered a rueful shake of the head. “It’s going to be interesting,” he said. “He’s under a unique kind of pressure.”

What the stick-to-sports crowd doesn’t get is that athletic fields offer some of our most powerful symbolism. Hitler understood this with his bombastic staging of the 1936 Olympics, and Jesse Owens’s subsequent brilliance was an eloquent statement on the equality of all men. From Tommie Smith and John Carlos’s raised fists to Colin Kaepernick’s bended knee, Muhammed Ali’s stance on the Vietnam War to George W. Bush’s ceremonial first pitch in Yankees Stadium in the days after 9/11, sports is the ultimate arena for bringing us together or protesting what tears us apart.

Lowry is a native of Clara, 50 miles west of Dublin and 100 miles from the invisible border that separates the Republic of Ireland from Northern Ireland. Winning a golf tournament — even this one — would not suddenly erase the harsh realities of the divided Irish island, but it offered a stage for potent imagery. In the gallery down the right side of the 1st fairway, four tri-colored flags from the Republic fluttered. In another context, here in the dark green heart of Northern Ireland, this could be a provocation. Instead, it was a celebration of the man who was suddenly a favorite son. Lowry made a hash of the 1st hole but drilled an eight-footer to save a crucial bogey. He pumped his fist and Portrush shook. Golf is the only shared religion in this part of the world. “Today there’s not a Northern Ireland and an Ireland,” Graeme McDowell said following his final round. “Shane has united us all. There’s not a person on this island who isn’t pulling hard for him to get across the line.”

The homegrown heroes put the heart into this Open. McDowell shed a tear on the 1st tee Thursday morning, the Open having returned to his hometown for the first time in 68 years. Rory McIlroy was even more overwhelmed by the moment, posting a ghastly 79 and then, when his furious rally to make the cut fell short, a whole nation cried along with him. When another Northern Irish lad, Darren Clarke, botched the 36th hole to miss the cut there was a distinctive heaviness in the air, a reminder that “luck of the Irish” is meant to be ironic. But Lowry changed the mood of the entire island on Saturday with a dazzling 63 that gave him a four-stroke lead. He was carried home on the closing holes with joyous singing that lasted long past the final putt, an instantly iconic scene. Something special was brewing and it was far bigger than birdies and bogeys. “Honestly,” Lowry said, “that’s the most incredible day I’ve ever had on the golf course.” 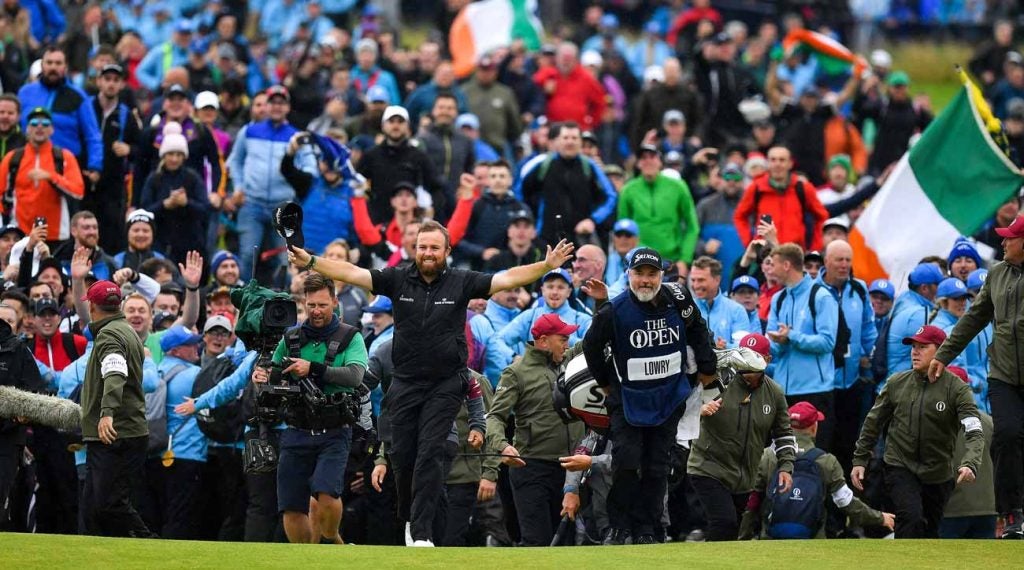 Shane Lowry had Ireland behind him at the 2019 Open at Portrush.
Getty Images

With his red beard, beer belly, big laugh and easy manner, Lowry is easy to root for no matter where you’re from. You had to love the statement he made on Sunday, sauntering around Portrush in short sleeves in by far the nastiest weather of the week. This kind of machismo is usually reserved for offensive lineman displaying naked arms when it’s snowing in Green Bay. “I’m not sure I was feeling anything out there I was so worked up,” he said. (Lowry’s caddie, Bo Martin, from Ardglass, an hour and a half down the coast, outdid his boss, flashing some decent calves in Bermuda shorts.) In the wind and the rain all the would-be challengers retreated: Brooks Koepka began with a shocker, four straight bogies; J.B. Holmes and Rickie Fowler blew their opening tee shots O.B.; Jon Rahm played the first five holes in four over; Justin Rose toured the front nine in 41. But Lowry sailed on. Beneath the soft exterior is a fierce competitor who has never lacked for confidence. Lowry famously won the Irish Open while still an amateur, keyed by a 62 on the same day McDowell shot 61. The brash 22-year-old found the Euro tour stalwart in the clubhouse and without so much as introducing himself said, “I can’t believe you beat me by a shot!” McDowell still rolls his eyes at the memory. He knows more than anyone how hot Lowry burns: “We always used to joke he wants to beat me more on a Wednesday than he wants to win the tournament.”

And so on Sunday, as the Open turned into a war of attrition, Lowry seemed to be the only one hunting birdies. (Playing partner Tommy Fleetwood’s putter sabotaged what his caddie Ian Finnis called, “Considering the wind, probably the best ballstriking performance I’ve ever seen from him.”) Lowry’s approach shot on the 4th hole rode the breeze expertly, and the short birdie putt restored his four-shot lead. On the next hole, a petite par-4, he produced a gorgeous pitch for another bird. At the par-5 7th Lowry did it again, with a deft pitch-and-run for a birdie that pushed his advantage to a whopping six strokes. You could practically hear pint glasses clinking all over Ireland.

“He has some of the best hands I’ve ever seen,” says Padraig Harrington, who delights in (and often loses) practice-round chipping contests against Lowry. (On Tuesday of this week, Lowry could be seen picking lob wedges off the Portrush fringes with a full swing, just for fun.) Lowry made three bogies in the middle of the round as the conditions went from bad to apocalyptic but the lead never dipped below four. When he birdied the 15th it was back to six and the party was on, though Lowry, 32, refused to acknowledge it. Before this week he had won three Euro Tour events and the WGC at Firestone in 2015, but his bona fides as a closer have been impugned ever since he coughed up a four-stroke lead during the final round of the 2016 U.S. Open. “I learned a lot about myself at Oakmont,” Lowry said. “I’ve always said I would give anything to play those last four holes again.”

And so down the stretch at Portrush he refused to let his dour game-face crack.

But he wasn’t really fooling anyone. What kind of bloke is Lowry? When he came to Portrush last month to scout the course he showed up in the pro shop carrying “tray bakes” — homemade goodies for the staff. “Caramel squares, rice crispy buns, some chocolatey thing…” says Royal Portrush assistant pro Charlene Reid in a dreamy tone. “That’s not the only reason we love Shane around here, but it didn’t hurt!”

He’s just as popular in the press room, locker room and caddie yard. “This is one of the worst days I’ve ever had and one of the best,” said Finnis, Fleetwood’s looper. “It was an incredible environment to be in. I’m sick for Tommy. But I’m delighted for Shane. He’s one of the top-five best people I’ve ever met in my life.”

Lowry didn’t let the emotion hit him until he was safely in the 18th fairway. He took a theatric breath of relief on the tee. Coming off the box the fans bellowed “Go on, Shane!” and “Well played, Shane!” He pumped his fist and offered a wicked grin. He was serenaded all the way up the fairway by the unofficial anthem of European golf, “Olé! Olé! Olé!…”

In the Royal Portrush clubhouse the ruling class of Northern Ireland gathered. In a display case on the first floor is the medal Max Faulkner won for his Open victory way back in 1951. This wondrous course should have become a regular part of the rota but in the 1960s the Troubles began. This civil war would rage for the next three decades, leading to 50,000 casualties and more than 3,000 deaths. It took 20 years of a fragile ceasefire to get the Open back. Now, on the clubhouse televisions, Lowry was giving his victory speech. When he choked up talking about his wife and young daughter a few sing-song awwws rang out. A roar went up went up when Lowry called Royal Portrush “one of my favorite places in Ireland.” He didn’t specify which side of the border. There was no need. On this day, the champion golfer of the year had erased that unseen line with a performance for the ages.