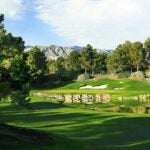 Shadow Creek in Las Vegas will host the LPGA Tour in May.

Shadow Creek is getting its next match-play extravaganza. The same posh Las Vegas course that hosted the $9 million match between Tiger Woods and Phil Mickelson in 2018 will now be the venue for 64 of the best women’s players in the world.

The LPGA announced that the inaugural Bank of Hope LPGA Match Play will be played at Shadow Creek on May 26-30, 2021. The match-play competition was previously announced in December as one of the LPGA Tour’s new 2020-21 events, but the venue wasn’t made public until Thursday. It will also serve as the final prep for the U.S. Women’s Open, which will be held the following week at the Olympic Club in San Francisco.

The Bank of Hope LPGA Match Play Hosted by Shadow Creek, its official name, will feature 64 players and dish out a $1.5 million purse. The 64 players will be divided into 16 groups of four and compete in three days of round-robin matches, with the winner of each group advancing to a 16-player single-elimination bracket for the final two days. It’s the same format the PGA Tour uses for the WGC Match Play.

Shadow Creek is owned by MGM Resorts International and only accessible to resort guests. Even still, at $600, it’s one of the most expensive tee times in the country. The 1989 Tom Fazio design recently hosted the PGA Tour’s CJ Cup in October, which was relocated from South Korea due to Covid-19 travel restrictions.

This is the first time the LPGA will play a tournament at Shadow Creek and is its first match-play event since the 2017 Lorena Ochoa Match Play. All five rounds at Shadow Creek will be broadcast on Golf Channel.