2020 Safeway Open live coverage: How to watch Round 2 on Friday 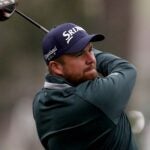 Shane Lowry got off to a solid start on Thursday at the Safeway Open.

Competitors fought through fog and a smoky haze in the opening round of the 2020 Safeway Open in Napa, Calif., and now they’ll battle the course and each other to make the cut in Round 2 on Friday. Here’s what you need to know to watch the second round.

The spotlight was on Phil Mickelson on Thursday at the Safeway, with him still beaming from a win in his Champions Tour debut less than a month ago. Mickelson didn’t quite live up to the hype, finishing with an opening-round 71, but he has one more shot to go low on Friday and position himself for the weekend, or fade away and head home early to get ready for the U.S. Open.

Mickelson’s playing partners had no part in his struggles in the first round. Reigning Open champion Shane Lowry shot a 4-under 68, while Brendan Steele went really low, reaching seven under to get near the top of the leaderboard. But the best round of the morning wave went to Russell Knox, who canned seven birdies and an eagle for a round of 63.

Below you will find everything you need to watch the second round of the Safeway Open on Friday.

How to watch Safeway Open Round 2 on TV

Golf Channel will air the action for the second round of the Safeway Open with three hours of coverage from 4-7 p.m. ET on Friday.

How to stream Safeway Open Round 2 online