Pro makes cut at U.S. Open in the most impressive way possible 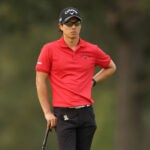 Ryo Ishikawa's 29 pars are only half the story why he was able to make the U.S. Open cut.

Ryo Ishikawa is not going to win the U.S. Open, but his week will be one of the more impressive ones at Winged Foot. The 29-year-old made the cut on the number, which is an accomplishment in its own right, but the way he did it was unlike anyone else.

He made just one birdie.

Ishikawa began his Open with three pars and one birdie to reach one under after four holes, and that was it for circles. He made one bogey and one double on Thursday’s back nine. Then he made 14 pars and four bogeys during Friday’s second round. That’s a 72-74 for six over and a made cut.

He was tied for 137th in the field in birdies made, but made 29 pars in his first 36 holes. Everyone in the field would sign up for 29 pars this weekend, it’s that good. Seriously, if you put a 10-handicap in the center of every green in regulation they might not be able to make 29 pars in 36 holes.

While he has struggled in his approach game, ranking 130th in the field in SG: Approach, Ishikawa has made up for it around the greens and with the flatstick, ranking 13th in SG: Putting. Whatever gets the job done.

Ishikawa’s par-making trend was upended early Saturday during the third round as he started out with four bogeys and two birdies on his front nine, adding another bogey after he made the turn to 10. It wasn’t going to last forever!

Jordan Spieth on Rickie Fowler: 'It's impossible to struggle in silence'

Bryson DeChambeau fails to drive Bay Hill 6th green, but hasn't given up on possibility