Who on earth are all those people inside the ropes at the Ryder Cup? 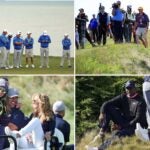 It's a free-for-all inside the ropes at the Ryder Cup.

HAVEN, Wis. — As Xander Schauffele surveyed his lie in the trampled rough, a security guard waved over his partner for a quick consult. A chute had formed around the American player and his caddie, as typically happens when a pro’s golf ball escapes a hole’s traditional confines.

“Let’s make sure there’s not a rush to get on the other side of the ropes,” one guard told the other. “He could get overrun.”

The Wisconsin crowd was thirsting for access, tens of thousands of fans condensed to watch just four matches. It was a worthy fear, that a player could get enveloped in a mini-stampede as spectators competed for the closest seats to the ropes.

That was a compelling subplot. But I was more interested in the masses of humanity already inside the ropes. Who were all these people?

Golf tournaments are obsessed with badges and access. Hospitality tents require a certain letter on your credential. The team rooms demand a certain color lanyard. To get inside the ropes at Whistling Straits, members of the media are dressed in oversized red vests, which have the dual effect of identifying the journalists to keep them in their proper spot and lowering our self-confidence to the point we wouldn’t dare sneak anywhere anyway.

Different tournaments handle this sort of credentialing in distinctly different ways. Augusta National keeps the strictest hold on its fairways, allowing almost nobody inside the ropes save for players, caddies and the occasional cameraman. Coaches, media members, significant others and celebrities are each relegated to the spectator side of the action.

I took a stroll through the final matches on Friday evening as they were finishing up to figure out why, exactly, the Ryder Cup is so different. Who were these people?

Let’s start with the assistant captains. There was Davis Love III, monitoring the action and relaying information on his earpiece. Assistant captains do a lot of monitoring. They do a lot of relaying on their earpieces. Phil Mickelson served the same role for the group that followed, and as the matches wrapped up he was joined by his wife Amy, a clear fan favorite.

There are the cart drivers, too. Fun fact! Each team is allotted exactly six golf carts (referred to in the captain’s agreement as “Team Golf Cars”) and those carts naturally need operators. There was Steve Stricker’s wife Nicki driving the cart down the side of the hole, daughters in tow.

The Strickers fit right in — this is a family affair! You’ve likely seen shots on television of significant others cheering on their respective sides; they’re inside the ropes wearing team colors and feeling team nerves. As Jon Rahm and Tyrrell Hatton advanced down the 16th hole, clinging to a 1 down deficit, their wives lounged with a number of European family members on a patch of hospitable rough.

There are the other players, too. Four from each side sit each team session, so Jordan Spieth was available to cheer on his foursomes partner Justin Thomas in the afternoon. Then there are the players who finish up from the adjacent matches. Rory McIlroy arrived to the European cluster at No. 16 just as the scoreboard changed, indicating another American point from the 17th green. He mouthed an expletive as he sat down beside Matthew Fitzpatrick, who gave him a supportive punch on the arm. Tony Finau wasn’t far behind, but his body language was distinctly different; he was joking with his son and his shoulders were bouncing, the way you do when you make a bundle of birdies and finish your opponents on No. 15.

When Rahm poured in a clutch birdie putt, the gaggle got life. Shane Lowry leapt to his feet. Rahm’s wife Kelley got fist bumps from the lot. Team Hatton-Rahm had life in them yet.

The reality of a four-match Ryder Cup setting is that everything is saturated; when four matches becomes two, that’s doubly true. A legion of photographers settled on this marquee matchup, hoping to capture Bryson DeChambeau in action.

Others hard at work populated the edges of the rough, too: Cameramen, security, spotters, ShotLink employees. There was talent walking the ropeline, too, like Notah Begay III, working for NBC, or his equivalent working for Sky Sports. Another man was calling the action for SiriusXM. You get the idea.

Steph Curry did a stint on the NBC broadcast, too, and now here he was engrossed in the action, taking care not to slip on Whistling Straits’ treacherous side slopes. Training camp’s right around the corner, after all. Michael Jordan was there, too, taking only partial advantage of his inside-the-ropes lanyard. He used to drive the carts. He still loves this event as much as anything.

Other VIPs dotted the landscape. Some were recognizable, like golf omnipresence Jimmy Dunne. Others weren’t, but their connections to the event and those behind its scenes are likely no less significant.

Coaches were allowed in, although one told me that had required a last-minute negotiation to get American coaches on the inside. Agents were in there, too, monitoring their horses as they trotted one of the world’s biggest tracks.

At a certain point it became tougher to think of people who weren’t inside the ropes. There was Ben Crenshaw. There was Ian Poulter’s son. There was Michael Greller. There was Teemu Selanne.

And then, of course, there was me, and others like me, swimming in our red vests, kneeling to stay out of the way of the paying customers, who hugged the rope line’s far side. It’s a privilege I’m constantly aware of, getting easy access to the event’s best views, and I try my best not to ruin the view of someone who’s been setting up the perfect sightline for 90 minutes or more.

It’s fair to wonder if all these people need to be inside the ropes. On the one hand, it’s fun to have many of them there, to see the players and their teammates and their families, all cheering each other on. That’s part of this event’s pageantry and also part of its challenge — how do the players stay focused in the presence of maximal distraction?

Mostly it’s a curiosity, a fascinating amalgamation of folks with deep golf connections, each of them parachuted onto the same golf hole, navigating the same trampled fescue. And mostly it doesn’t much matter who’s in there. Until one of them stands right in front of you.