How are Ryder Cup captains decided? Inside the selection process 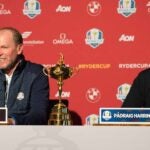 Steve Stricker and Padraig Harrington are the 2021 Ryder Cup captains, but how did they get here?

Belichick and Brady, Jordan and Jackson … Love III and Woods?

Of all the differences between golf and other major professional sports, perhaps the most glaring is the absence of coaching. No, not swing coaching — there’s an extraordinary amount of that in the world of pro golf, enough for GOLF to create its own list of the Top 100 Teachers. Rather, golfers rarely find themselves receiving the sort of strategic and emotional guidance provided by a great coach.

One of the sole exceptions to this rule comes at the Ryder Cup, in which professional golfers break out of their individualist shells and begin competing as part of the collective once again. Ryder Cup teams even have head coaches (called “captains”) and assistants (called “vice captains”) whose sole jobs are aiding in the strategy and emotional turbulence of tournament week.

This year the captains are Steve Stricker and Padraig Harrington for the Americans and Europeans, respectively. The two elder PGA Tour stars serve as both Ryder Cup veterans and sounding boards for their players, helping to craft and shape the overall look and feel of the tournament (right down to to course setup).

But how are these people selected for their posts, and what makes a good Ryder Cup captain anyway?

How is the European Ryder Cup captain selected?

How is the U.S. Ryder Cup captain selected?

The U.S. Ryder Cup captain is also selected via board vote. The eventual selection comes via the PGA of America’s 21-person executive committee, which consists of golf stakeholders from around the country. The board’s job is to discuss various candidates, their worthiness and overall resume before settling upon a final selection.

What makes a good captain?

It depends! Most captains are selected on the basis of their own professional and Ryder Cup experience, and all are former players. They are also usually vice captains before they get the big job later on. Some captains adopt more emotional leadership styles (See Azinger, Paul and Olazábal, José María), while others prefer analytical approaches (which seems to be the preferred stategy of current U.S. captain Steve Stricker). In either case, what matters is the ultimate result — not the means of getting there.