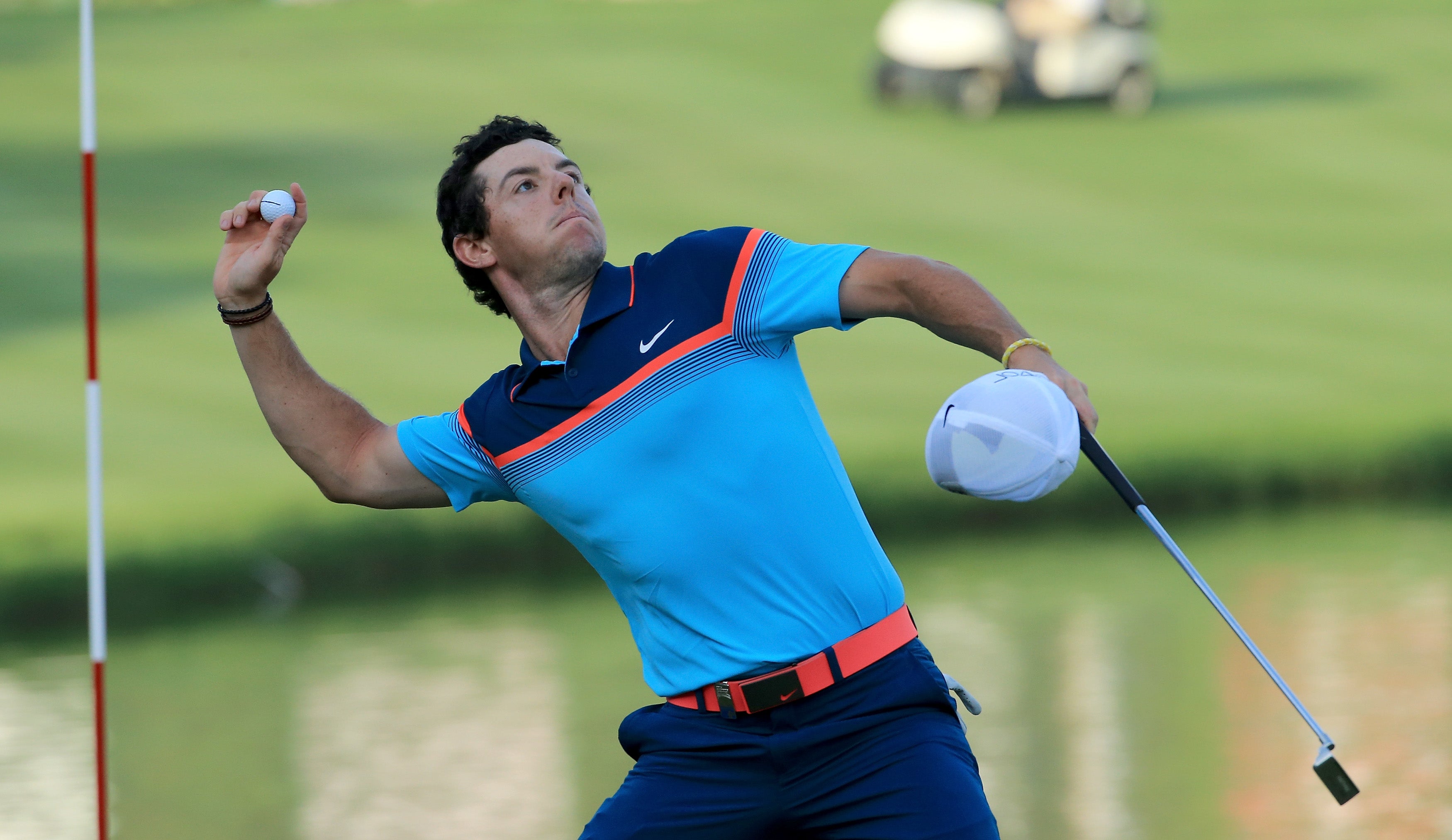 Rory McIlroy throws his ball into the crowd after holing out on the 18th green to win the 2015 Dubai Desert Classic.
David Cannon / Getty Images

Northern Ireland’s Rory McIlroy solidified his position as the World’s Number 1 golfer with an impressive victory in the Omega Dubai Desert Classic at the Emirates Golf Club, Dubai.

The 25-year-old finished three shots clear of charging Swede Alex Noren after posting a solid closing round of 70 over the Majlis Course.

McIlroy began the final round with a four-stroke advantage over Denmark’s Morten Orum Madsen, but his cushion at the top of the board was quickly extended when the Dane racked up a triple-bogey at the first hole.

Former World Number 1 Lee Westwood threatened to mount a challenge, with three birdies in his first five holes. But the Englishman was derailed by a double bogey at the 9th hole and eventually finished in a tie for ninth.

The back nine turned into something of a procession for McIlroy. He played the percentages over the closing holes to close out the victory in a most efficient manner. It was McIlroy’s second victory in the Dubai Desert Classic – he picked up his first European Tour title in this event back in 2009.

“It’s nice to put my name on that trophy again,” he said. “I did what I needed to do today. I didn’t play quite as well as the first three days but I played a solid round and kept my nose in front.”

Four things we learned at the Omega Dubai Desert Classic:

1 – Rory McIlroy seems a league apart at the moment at the pinnacle of world golf.

His recent record in European Tour events is phenomenal. In his last seven starts on the circuit he has returned four victories and three seconds – it’s arguably the best streak in the history of the European Tour. He is 118-under-par for those tournaments. The Northern Irishman has extended his lead at the top of the World Rankings – moving to 11.6605 points. Next best, Henrik Stenson is over four full points behind.

2 – Sweden’s Alex Noren continued his welcome return to form with an excellent runner’s up finish in this event.

The talented Swede spent almost all of 2014 out of action, suffering from tendonitis in his wrists. But he seems to be back to his best at the start of 2015. The Swede was ninth in Qatar last week and he built on that performance in Dubai, posting a fine last round of 65 to take second place on his own.

“It was an amazing day, an amazing week,” said the 32-year-old. “I missed it so much – feeling my pulse and some nervousness, it’s really nice to feel it again.”

Related: Alex Noren’s tips on how to play from a fairway bunker

3 – Stephen Gallacher of Scotland was going for an incredible third straight win in this tournament and he came impressively close to achieving the hat-trick.

He ended the week alone in third place, six shots behind McIlroy. The Majlis Course at the Emirates Club is clearly a track Gallacher loves, his last four results in this event have been 2nd, 1st, 1st and 3rd. He’s won almost €1,000,000 as a result of those finishes.

4 – The back nine of the Majlis Course at the Emirates Club is renowned for producing low scoring, but Scott Jamieson of Scotland clearly hadn’t read that script on Sunday.

He went into the final round at four-under-par and might have hoped to build on that foundation. But Jamieson played the “scoreable” second half of the course in 47 and finished dead last. He closed with an 83 – There’s comfort for Tiger Woods: someone posted a worse score than him on one of the main tour’s last week!