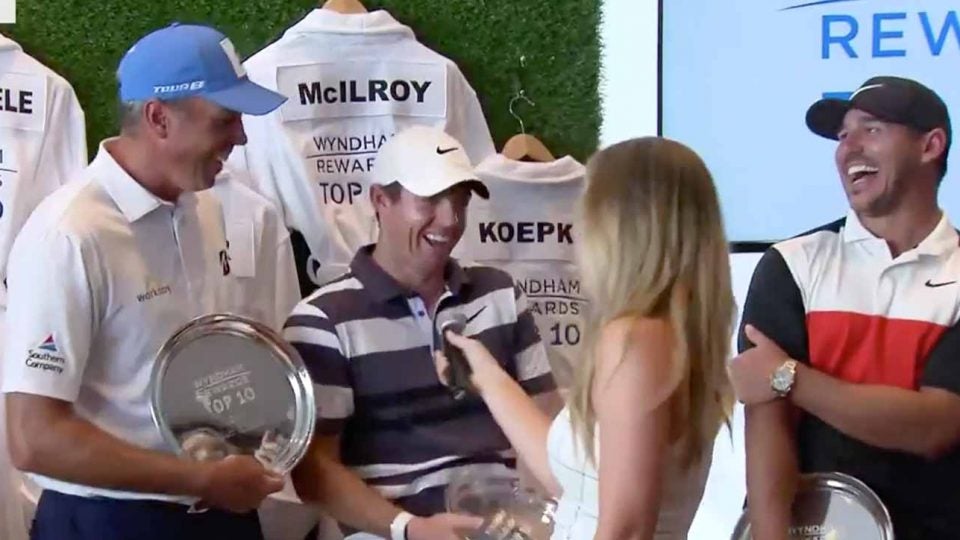 The 10 players who cashed an inaugural Wyndham Rewards bonus were honored on Tuesday night, and Rory McIlroy stole the show with a good-natured jab at Matt Kuchar.

The Wyndham Rewards Top 10 was launched this year to pay out $10 million in bonuses to the top 10 players in the FedEx Cup standings following the conclusion of the regular season. On Tuesday there was a brief presentation for the lucky 10. Brooks Koepka took home the top prize, a cool $2 million.

As players were interviewed in front of a small crowd, Kuchar explained how he was bummed that McIlroy beat him by only two points (574 to 572), which was a difference of $300,000. McIlroy, who finished second on the list, grabbed $1.5 million while Kuchar earned $1.2 million for third.

Tournaments
#AskAlan mailbag: Will the new Tour Championship format be a disaster?

That’s when McIlroy decided to bring up one of the most controversial stories of the season.

“And we all know what money means to him,” McIlroy quipped.

Kuchar, McIlroy, Koepka and the rest of the crowd broke out in laugher, which gave way to a few “Ohhhs.”

If you need a refresher, McIlroy was referring to the famous Kuchar-caddie controversy that went down after Kuchar won the Mayakoba Golf Classic in November. He won with a fill-in caddie, David “El Tucan” Ortiz, who Kuchar paid $5,000 out of his $1.3 million winner’s check. After the story got out and Kuchar received backlash over the small payment, Kuchar paid Ortiz $45,000 more for a total of $50,000.

You can watch the Kuchar/McIlroy interaction below.