For Rory McIlroy, the PGA Championship was another what-could-have-been major week 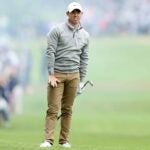 Despite posting a Sunday 68 at Southern Hills, Rory McIlroy came up short in yet another major championship.

TULSA, Okla. — It was a familiar scene for Rory McIlroy on Sunday at the 104th PGA Championship.

Following a lackluster third round at Southern Hills, McIlroy arrived at the course Sunday morning well before the legitimate contenders. Nine shots separated the four-time major champ from the lead, and he knew he needed a special round for any chance at taking home his third Wanamaker Trophy.

Through five holes, McIlroy produced just that. After opening with a par, he ripped off four consecutive birdies, culminating with a nifty up-and-down out of the bunker at the par-5 5th for yet another circle on the card.

A buzz started building on the grounds. Golf writers and pundits fired off takes on social media. Could this be the Sunday Rory finally breaks through and completes the comeback? The patented “Rory strut” reemerged from hibernation.

But just as suddenly as McIlroy seized momentum, he lost it once again.

A loose tee shot and lackluster chip at the 6th produced his first bogey of the day — and, just like that, the run was over. McIlroy failed to card another birdie for the rest of the day.

That’s not to say he didn’t have his chances. Four times over his remaining 12 holes, McIlroy hit his approach within 15 feet of the cup. And four times he came up empty. He made just two putts over 10 feet from No. 5 on, and they were both to save par.

When McIlroy walked up the hill behind the 18th green on his way to the scoring tent, he stared straight ahead. Nothing — not the children screaming for autographs nor the fans singing his praises — could break him from his trance.

He knew the opportunity this week presented. Yet again, he came up empty.

A maddening Sunday is far from the main culprit in McIlroy’s up-and-down week, which began with a brilliant first-round 65. That honor likely belongs to a Saturday riddled with big numbers, or the Friday he spent stuck in neutral. But on a day when those ahead of McIlroy could not distance themselves from the pack, this PGA Championship Sunday represents a golden opportunity lost.

The cruel thing about this week for McIlroy is that it didn’t follow the script of his typical major struggles. The norm (at least for the last half decade or so) has been for him to get out to a slow start. For whatever reason, Thursdays just haven’t been his friend. This week, he seemed to have conquered those demons.

“It was a great start to the tournament,” McIlroy said. “It was nice to get off to that good start and sorta keep it going.”

He arrived for a late tee time on Friday with the benefit of dying winds, and a leaderboard without much star power at the top. But on a day when McIlroy could have stretched out his lead like a thoroughbred on the back stretch, he instead posted a one-over 71.

By day’s end, he sat tied for fifth, five strokes behind the pace set by ball-striking phenom Will Zalatoris. Still, McIlroy’s spirits remained high, and his optimism for the weekend ahead remained intact.

McIlroy was half-right in his weekend prediction. With a cold front roaring down the Plains off the Rockies, temperatures dropped, and the wind direction flipped. The scoring average remained a couple over par — despite cutting the bottom half of the field — and the players who adapted best to the chilly conditions rose to the top of the board.

McIlroy was not among them. Even with four birdies on the card, big numbers — a double on 6 and a triple on 11 — sent his name tumbling down the leaderboard. As the sun set over Tulsa Saturday evening, McIlroy sat nine sit behind Mito Pereira’s 54-hole lead.

Sunday followed a familiar script. McIlroy got out to a fast start and his galleries swelled. He made some mistakes, but his elite ball striking kept a sliver of hope alive in his bid to win a fifth major title. But as hole after hole passed and he could not muster any magic, the disappointing reality set in — he would not leave Tulsa with the Wanamaker Trophy.

He emerged 10 minutes later, Nike duffel bag in tow. He walked toward his courtesy Escalade in the parking lot and loaded his belongings into the trunk: his golf bag, his duffel and another what-could-have-been top-10 finish in a major championship.