Why Rory McIlroy isn’t winning, according to a former Ryder Cup captain 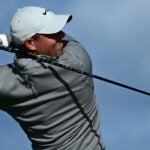 Rory McIlroy hits his tee shot on Friday on the 11th hole on the North Course at Torrey Pines.

The droughts are alarming. But mostly in that it’s known what McIlroy can do. He was winning at Abu Dhabi through 54. He’s won the four majors. He’s won 18 times on the PGA Tour and eight times internationally. Only, McIlroy knows it, too. And therein lies one of the reasons why he isn’t winning, said a former Ryder Cup captain.

“I think that pressure situations are more of a challenge for him at the moment in that he feels a lot of expectation, both internally and externally, but doesn’t seem to have a strategy to counteract what sits side by side with anyone so talented,” wrote Paul McGinley this week in a column for Sky Sports. “That, to me, is the root of the issue, as I don’t see any part of his game that is particularly weak.

“I know you can say he hit some poor wedges and poor putts during the final round in Abu Dhabi, but that’s pressure-related in forcing the issue as he had lost the competitive initiative. Earlier in the week, when he was posting the low rounds, the wedges were brilliant and the putting was brilliant, when the pressure was not at its most intense.”

McGinley, of course, isn’t alone in making a McIlroy theory. In June, at the Charles Schwab Challenge, McIlroy torpedoed his chances at victory with a front-nine 41 in the final round, and six-time major champion Nick Faldo said during CBS’ coverage that “it seems like looking from the outside, he doesn’t have a Plan B to switch to, just to find a way to get around it. Just maybe too much frustration going on.” McGinley, in his column for SkySports, agreed with Faldo.

McIlroy, for his part, has lamented about the lack of fans at events during the pandemic. Before the Players was canceled in March due to the coronavirus, McIlroy had finished no worse than a tie for fifth in five events and reclaimed the No. 1 ranking in the world. “Sometimes it just felt so casual,” McIlroy said before this week’s Farmers Insurance Open. “You’re just out there playing and it’s sort of just like playing a practice round. That’s been the thing that I’ve had to get used to, because like, I play way better on Tour than I do at home because I have something to focus me.”

From a more technical standpoint, McIlroy also visited renowned swing coach Butch Harmon in October, “going through everything in his swing,” Harmon told Sky Sports in November. McIlroy also said at the Masters in November that “over the last two months I’ve worked on some technical stuff in my swing that I needed to. Swing was getting very flat and very deep underneath the plane on the way down.”

At Augusta, McIlroy tied for fifth — closing with three straight rounds in the 60s — and was third in Abu Dhabi. This week, at the Farmers, he’s five under through two rounds and among the leaders.

“I thought for the most part of the week, my short game and my putting was good,” McIlroy said after his final round in Abu Dhabi. “I scrambled well. Had some pretty good approach shots, especially last night coming down the last few holes. I thought there was parts of rounds where I got the driver going, even the last few holes this evening there I got the driver going a little bit.

“But still, sometimes I’ll have a few holes where it’s like that and there’s a few holes where it sort of gets away from me. So a little more consistency and being able to replicate the good ones hole after hole and then day after day until you sort of put four rounds together.”

'Was wondering who that was': Pro pranked by PGA Tour, granted ‘sexiest golfer’ wish