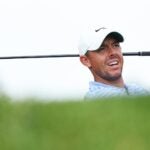 Rory McIlroy will make his first PGA Tour start of 2021 at the Farmers Insurance Open.

According to Rory McIlroy, you don’t want him on your Wednesday pro-am team.

“There’s been many where I’m sure the amateurs have come off the course like, ‘How the hell is that guy as good as he is?'” McIlroy told reporters after his Farmers Insurance pro-am on Wednesday. Pressed to name one memorably bad round, McIlroy could only laugh.

“There’s been a lot of them,” he said. “It got to the point where I would play in a pro-am and shoot 76, and that’s not great for your confidence going out to play the next day in the tournament.”

McIlroy’s lackluster early-week play reached such a level of mediocrity that he and his caddie Harry Diamond started wagering on his score every practice round, whether for dinner or something more trivial, just to keep him engaged.

It’s funny to think of the four-time major champion making a bunch of sloppy bogeys in a practice round and leaving his playing partners unimpressed. But it also speaks to a very real theme about McIlroy’s game: He needs some juice to perform at his best. And that has very real implications for his tournament play.

Before the pandemic, McIlroy was in the midst of arguably the most consistent stretch of golf in his life. He won the 2019 Tour Championship, then started the 2020 PGA Tour season T3-win-T3-5-5-T5, with a couple top-fives on the European Tour mixed in for good measure. The fan favorite had regained his status as world No. 1 by the time he arrived at TPC Sawgrass to defend his Players Championship title. He opened with a round of even-par 72 — and then the sports world shut down for months.

When the PGA Tour returned to competition some three months later, McIlroy returned, too, but his game was distinctly less sharp. Before the break, he’d posted 20 top-10s in his last 24 PGA Tour starts. But post-hiatus he failed to crack the top 10 in any of his first eight starts and, despite a spirited Sunday charge at Augusta, never meaningfully contended the rest of the year.

In golf, there’s no way to isolate one variable. It’s impossible to say that McIlroy wasn’t playing to his usual standards because there weren’t any fans in attendance. But he certainly seemed to miss them. He spoke consistently of a lackluster atmosphere, of one tournament blending into the next, of a lack of urgency in his competitive rounds.

“It obviously wasn’t the year that I wanted,” he said Wednesday.

And while it’s difficult to quantity the effect of their absence, McIlroy himself correlates feeling off with the no-fan phenomenon.

“Sometimes it just felt so casual,” he said. “You’re just out there playing and it’s sort of just like, playing a practice round. That’s been the thing that I’ve had to get used to, because like, I play way better on Tour than I do at home because I have something to focus me.”

Not every pro shares this trait with McIlroy. It’s far more common to hear of pros posting rounds in the low 60s at their home courses but struggling in the bright lights. But McIlroy described his games at home, playing with Justin Thomas or Rickie Fowler or Dustin Johnson or any other Jupiter-based pro, zipping around in carts, playing match play, picking up four-footers, leaving the pin in.

There’s good news for McIlroy backers, though. He regained some form late in 2020, posting top-10s at the U.S. Open and the Masters, which each had limited spectators. And he began 2021 with a strong showing in Abu Dhabi last week, jumping out to the 54-hole lead and finishing third in front of a crowd of a few hundred. Now, with McIlroy making his 2021 PGA Tour debut, he’s looking forward to the 5,000 spectators at next week’s Waste Management Phoenix Open and thinking optimistically about the idea of more fans at more tournaments down the road.

“Sometimes you have a pin that’s tucked behind a bunker or something and you can’t see the bottom of it,” he said. “And you think you’ve hit a good shot, but you have no idea where the ball is. It will actually be nice to just have a reaction, to get a clap or not get a clap or whatever.”

I like his chances of hearing some applause in Phoenix. Oh, and if you’re wondering what McIlroy’s “bad golf” at home looks like, well, it’s still pretty damn good. Sometimes he’ll play nine holes in a “worse-ball scramble,” where he plays two balls and takes the worse of the two after each shot.

“I always know if I can shoot under par playing worse-ball then my game’s in pretty good shape,” he said.

If you tried the same game on your course, I expect you’d get a distinctly different result. But this is Rory McIlroy we’re talking about. And that’s exactly why we’ll be watching this week, eager to see which version of McIlroy we get.