Rory McIlroy, pride of Northern Ireland, turns 30 today. But since his age is just one number, we’ve unearthed 30 other revealing facts and figures from his colorful life and precocious career.

4—McIlroy’s current place in the Official World Golf Ranking, up four slots from the end of 2018.

1.5 million—Cost, in pounds, of the Bugatti Veyron the British tabs reported that McIlroy bought in 2011. McIlroy called the figure “total bollocks.”

10—Number of minutes McIlroy had to spare before he would have missed his singles match tee time at the 2012 Ryder Cup at Medinah. Confused over the schedule, Rory had to be rushed to the course in an unmarked patrol car. “At least I wasn’t in back,” he later joked.

170,000—Amount in dollars that Rory’s father, Gerry, collected form a bookmaker after Rory won the 2014 British Open; when Rory was 15, his dad had wagered that he would win the Open before he turned 25.

22—Rory’s age when he reached 10 million pounds in career earnings on the European Tour, the youngest player ever to hit that mark.

312.6—Number in yards of Rory’s average drive on the PGA Tour this season, placing him third in that category behind Cameron Champ and Luke List.

7—Height differential in inches between the five-foot-nine McIlroy and Dustin Johnson, who is averaging 305 yards off the tee this year.

10 million—Price in dollars of the house in Palm Beach Gardens, Florida that he purchased in 2012.

250 million—Rumored value in dollars of the 2013 endorsement deal he signed with Nike—a reported estimate that was later reduced in the press to $100 million.

61—Number of strokes he needed to play 18 holes at Royal Portrush Golf Club in 2005—a competitive course record. Rory was 15 at the time.

1—Number of engagements he had before getting engaged to his current wife, Erica Stoll.

17,000—Square footage of the Jupiter, Florida home where he and Stoll currently reside. 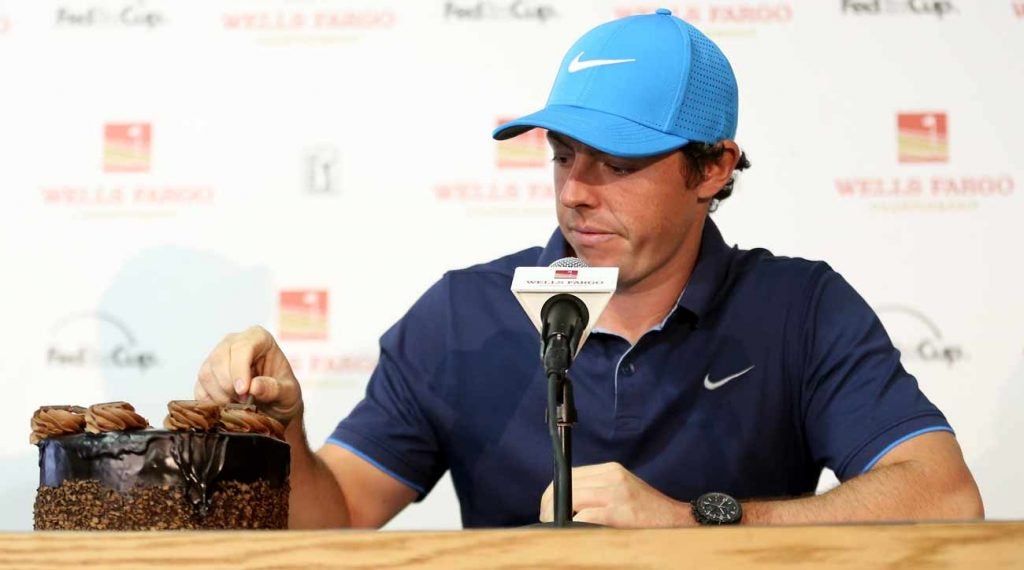 Rory McIlroy was presented with a birthday cake at the 2016 Wells Fargo Championship.
Getty Images

2-2-1—His career Ryder Cup singles record, amassed over five appearances in the event.

4.75—Average margin of victory in his four major wins.

4—Lead in strokes he had entering the final round of the 2011 Masters.

1—Lead in strokes he had making the turn that day.

7—Number of strokes he took to play the par-four 10th hole in that closing round.

4—Number of putts he took on the 12th hole that day, resulting in a double-bogey.

80—His final score that day.

9—Age in years when he made a star turn on a popular Irish talk show, chipping golf balls into his parents’ washing machine.

268—Number of strokes he took over 72 holes at the 2011 U.S. Open at Congressional, the lowest four-day total in the history of the event.

250—Weight in pounds of his maximum bench press. Rory himself weighs around 160 pounds.

45.7 million—Value in dollars of his on-course career earnings, placing him 11th on the all-time list, $4 million behind Matt Kuchar, at number 10.