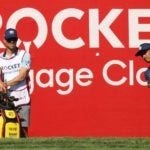 DETROIT — At this week’s PGA Tour event, fans at home will have no doubt what they’re watching. It’s the Rocket Mortgage Classic, of course, with Rocket Mortgage signage everywhere. It’s so prevalent that one must ask: could some form of grandstanding take place, without any fans or true grandstands?

On the back nine, it could very well play a role in how the championship is decided.

Seven of the last eight holes (hole 12 has none) at Detroit Golf Club feature some form of sponsorship signage located beyond but near the greens. Erring on the side of long — at least since the coronavirus began — has never made more sense than it does this week. It’s a stark comparison to what we’ve seen on the PGA Tour during its return.

The Travelers Championship, RBC Heritage and Charles Schwab Challenge had virtually no signage on site and near the playing areas. The courses looked baren, but not in a bad way. In an understandable, global pandemic kind of way. But here, Rocket Mortgage signage is everywhere. And perhaps that’s exactly how it should be, right? The $7.5 million purse is tied for the largest since golf’s return and the sponsor is the source of a lot of that cash. They ought to be featured ubiquitously. Well, it’s one half of a debate that prickles many on social media.

The other half arises when signage creeps close to the playing area and provides an easier out for shots that don’t deserve it. On 18 this week, signage sits as close as six paces from the edge of the green both left and long. Would an overcooked draw under pressure — like the one we saw Brendan Steele hit in Hawaii in January — result in a fine positional drop? Undoubtedly. Most of the other signs sit eight to 10 paces beyond the greens. When fans are on site, these circumstances are largely unavoidable. But there are no fans this week, next week, or in many of the weeks to come.

And so this week will present an intriguing case study. Good breaks and bad breaks are bound to occur for shots that fly too far, but only on the back nine. The entire front nine is signage free.

Many of the holes on the back nine feature half-grandstands, so only certain long shots could be punished while others won’t. Perhaps that’s just golf. On the 14th hole last year, Cameron Champ’s approach during the third round ended up 75 yards long of the hole. He received free relief left of the hole, pitched on and made a two-putt par. This year, 14 has about half of its 2019 infrastructure, so a similar shot is bound to be totally penalized for the mistake that it was.

And then there’s the 12th hole, a 449-yard par-4, which has no signage. During Wednesday’s practice round, Matthew Wolff was presented with a most-interesting shot (from the tricky lie above). He had flown his drive on the 12th wide right and nestled near the base of a tree. To reach the green, he’d need to punch a 7-iron under the tree in front of him and hope it slows down before going long. So I asked Matthew, if there was a backstop on this shot, just like there is everywhere else during the finishing stretch, would he considered sending a screamer into it?

“Absolutely not. Going long here is f—–,” Wolff said candidly. Without skipping a beat, his caddie jumped in and clarified: “But there are certain spots where you would definitely f—— do it.”