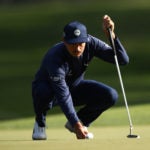 Rickie Fowler lines up a putt on Friday at TPC Harding Park.

This one is going to sting for Rickie Fowler. The fan favorite and one of the top candidates to be dubbed the Best Player To Never Win A Major let his weekend in San Francisco slip away with one putt that, well, slipped away.

Fowler opened the PGA Championship with a three-over 73 on Thursday at TPC Harding Park, but he was trending in a better direction Friday. Fowler started on the back nine and birdied the first two holes of the day, turning in three-under 32. He made another birdie on the 1st to get to four under on the day (and one under for the tournament), but he ran into trouble on the par-4 6th.

After missing the fairway and then missing the green, Fowler had nine feet for his par. He thought he hit a good putt but it didn’t fall, leaving him six inches for a tap-in bogey. Or so he thought.

Hovering over the ball with his weight on his right foot, Fowler seemed to lose his balance as he made his stroke. His putter hit the ground and then barely tapped the ball, causing it to move less than an inch. He looked stunned, then cleaned it up for a double bogey.

Fowler’s double pushed him back to one over for the tournament, and he then went par-bogey-par to close out his round. He shot a one-under 69 and finished two over overall, but the cut line turned out to be one over.