He’s a great dark horse for the PGA Championship. There’s just one problem 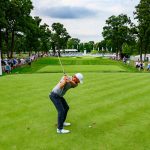 Lucas Glover during the 2019 BMW Championship.

When I head to this major or that one, friends will sometimes ask me for a little help with their office pools. (You remember office pools, don’t you?) I cite my long history of being a lousy swami, but because I once had Sam Snead’s home number, they want to hear whatever name I offer.

Lucas. Right. How do you pronounce that last name?

“That’s not a question.”

Turns out, one problem there.

Lucas Glover is not in the field.

Lucas Herbert is. HER-burt. He won the Omega Dubai Desert Classic 16 months ago.

Lucas Glover, best known for winning the 2009 U.S. Open, was born in South Carolina. He went to Clemson. He won the South Carolina Amateur three times. He hits it right on the face in every kind of wind and can flight it low and high and in between. He was, for years, a student of the late Dick Harmon, the quintessential PGA of America pro.

Needless to say, Glover didn’t check off any of the many boxes for an automatic place in the field, or he’d be in the field. Among them: past PGA winner; recent major winner; recent Tour winner; top 15 at last year’s PGA; top 70 on the PGA Championship points list.; top  20 in the PGA Professional Championship, for club pros and teaching pros. Etc.

But then there is Category 11, for PGA of America invitees. You probably heard that the PGA of America’s bosses invited Rickie Fowler to play this year as a special invitee. They did. Fowler — and 39 others, including the aforementioned Mr. Herbert, a promising young Australian player ranked 64th in the world. Year after year, the PGA of America prides itself in having the top-100 players in the World Golf Ranking in the PGA field. Top 100, and then some.

Steve Stricker, the American Ryder Cup captain, who is playing at Kiawah, is ranked 240th.

Charl Schwartzel, after a T3 at the Byron Nelson, is No. 109, but he was 157 on May 9, when he got his invitation. Kalle Samooja of Finland climbed to 109 after a T9 finish at the Canary Islands Championship on that same date.

Lucas Glover was No. 121 on May 9, after missing the cut at Quail Hollow, where he’s won. He’s 85th right now on the FedEx list. He’s 71st on the money list for the year. He’s been playing well, and way better than he was, say, five years ago.

Aaron Rai, an English golfer who wears two gloves, got invited. Lucas Glover did not. He’s home, practicing, his left hand as tanned as his right. He wears no gloves.

The last thing he wants is your sympathy. “I didn’t play well enough to get in,” Glover said by text. That’s what the old-school pros say. They don’t whine. They figure out a way to make better scores, or die trying.

You know those pools where you pick a guy and afterward that name is spent? You might take a look at this Aaron Rai. Good golfer. He won last year’s Scottish Open. Maybe you didn’t notice. The mahoffs at the PGA of America did. He plays early Thursday afternoon. He’s in the field, which means he has a chance.