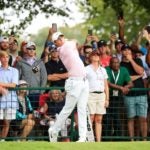 Fans watch Rory McIlroy tee off during the fourth round of last year's Tour Championship.

The PGA Tour has played without fans or pro-ams for the first month after its return from a three-month hiatus due to the coronavirus.

It will continue to play without them for at least the next two months.

The Tour will announce Monday that it will play the remainder of its 2019-2020 schedule – nine tournaments through the Sept. 4-7 Tour Championship – without anyone other than players, caddies and essential personnel due to the continuing pandemic, the Golf Channel reported Saturday, citing various sources. The Golf Channel reported that it was unclear whether fans and pro-ams would return when the Tour begins its 2020-2021 season the week after the Tour Championship.

The decision essentially adds four tournaments to the list of events without fans and pro-ams – the Aug. 13-16 Wyndham Championship in Greensboro, N.C., the Aug. 20-23 Northern Trust in Norton, Mass., the Aug. 27-30 BMW Championship in Olympia Fields, Ill., and the Tour Championship in Atlanta. The five other tournaments had previously done so, including the year’s first major, the PGA Championship, set for Aug. 6-9 at TPC Harding Park in San Francisco. The year’s other majors, the Sept. 17-20 U.S. Open at Winged Foot Golf Club and the Nov. 12-15 Masters at Augusta National Golf Club, have yet to announce their attendance plans.

Next week’s Memorial had been scheduled to be the first tournament with fans, then the Tour reversed course last Monday. PGA Tour commissioner Jay Monahan said in a statement then that the Tour would welcome fans “when the time is right.”

Rickie Fowler said Saturday he had not heard of the Tour’s decision to play without fans and pro-ams for the rest of the season, but would support it.

“In a way, it could have been inevitable at some point with where things were starting to go, but I think the Tour has done a great job thus far, and everything they’ve put in place, all the protocols, and sometimes it’s on a day-to-day, week-to-week basis trying to learn and progress as we go on,” Fowler said after his third round at the Workday Charity Open.