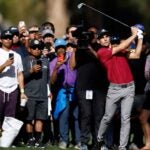 Joaquin Niemann has been nearly unstoppable this week at the Genesis Invitational.

PACIFIC PALISADES, Calif. — Joaquin Niemann is laying waste to Riviera Country Club. The entire field is taking advantage of the uncharacteristically benign George Thomas design this week, but no one is doing it quite like Niemann.

The 23-year-old has made 20 birdies and two eagles while dropping just five shots through 54 holes, posting a gaudy total of 19 under heading into the final round. His approach shots have been the best of anyone in the field, ranking first in SG: Approach, and his putting is third-best in the field to boot. It’s a lethal combination, and one that has Niemann poised to become the youngest winner in the 96-year history of the Genesis Invitational.

There’s an old cliche in golf which surmises that it’s difficult to follow up a good round with another good round. Niemann has poked holes in the theory all week.

He opened the tournament with a late-day 63 on Friday, came back the next morning and promptly put the pedal to the floor again. Niemann opened eagle-birdie in Riv’s chilly early morning conditions in Round 2, added six more circles to the card and posted another 63 before lunch.

Saturday’s third round was not quite as clean for Niemann as the opening 36 had been, but he still stretched his lead with a three-under 68. His two-stroke margin to open the day has now grown to three.

“I’m having the best time of my life right now,” Niemann said. “I’m enjoying it a lot and I just can’t wait to have a good day tomorrow.”

If he does have a good day, he could make a little bit of history.

Niemann has already set the 36- and 54-hole scoring records for the Genesis Invitational, and he has the opportunity to break the 72-hole record as well. If he can post a score lower than 70 on Sunday, he would break the previous mark of 20 under, set by Lanny Wadkins in 1985.

According to stats guru Justin Ray, that is the longest-standing tournament scoring record on the PGA Tour.

But Niemann isn’t the only player within striking distance of that long-held record. Tour rookie Cameron Young has also positioned himself to make a run at the mark thanks to his 16-under total through three rounds.

“If you’re in the right places and you’re making putts when you have opportunities, you can shoot a lot under,” said Young, who’s making his first career start at Riviera. “It’s a hard golf course, but if you’re on top of it, you can shoot a low score.”

He’ll need a low score if he hopes to chase down Niemann — and break some records — on Sunday. Luckily, he’s already proven this week he can take it deep.

As good as Niemann has been thus far, he does not have the low round of the week. That honor belongs to Young, who fired a blistering nine-under 62 in the second round. Paired with an opening-round 66, his two-round total of 128 marked the first sub-130 36-hole total in the history of the event, a feat which was matched by Niemann about 15 minutes later.

Playing alongside Niemann in Round 3, Young kept the lead in his sights, but even with a two-under 69 will start three strokes behind come Sunday morning. It hasn’t dampened his spirits, though.

“Anytime you start Sunday three back, whether you’re in tenth or second, you have a chance,” Young said. “Anybody out here can shoot eight or nine under and you just never know when it’s going to be you.”

Sunday is shaping up to be a two-man duel for the title at Riviera, but there’s more on the line than the $2.6M winner’s check and a nice shiny trophy. There’s also the potential for a little history.