This is the real key to growing the game, according to Dan Hicks 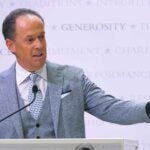 What is the most effective way to increase participation and interest in golf? Dan Hicks has a few thoughts.

Growing the game is a top priority for all of golf’s leading organizations. Everyone agrees that more should be done, but the question remains: What is the most effective way to increase participation and interest?

One man who’s had a front-row seat to the game at its highest level is longtime NBC broadcaster Dan Hicks, and in an appearance on this week’s episode of Off Course with Claude Harmon, Hicks spelled out his vision for attracting more players.

“I think that there’s probably more ways to try to grow the game and to make the game better than producing five-inch pamphlets of where the game’s going and how distance is going to kill the game,” Hicks said, referencing the USGA’s distance report, which was released earlier this year. “I think there are concerns about it that should be on the radar, but I don’t think we need any rolling back of equipment. I think we’ve got a mark in the sand. I think you can set up a golf course to a degree where you can make even these smaller places challenging.”

Harmon then asked Hicks how golf could better reach the next generation of players.

“You want to make it more accessible, so I think especially down at a grass-roots level, golf has got to be more welcoming,” Hicks said. “There’s got to be more accessibility to golf courses. There’s a a golf course that’s being developed down in Palm Beach, right in the middle of golf mecca in this country, that is going to be announced — I think a lot of people probably know about it. It’s going to be a municipal golf course, which a lot of big hitters down in the Palm Beach area have gotten together, raised a lot of money.

“That is a perfect way to grow the game,” Hicks continued. “Put yourself right in one of the biggest golfing communities of our country. Build a golf course that anybody can go to, affordability. Make it a nice experience, make it a good golf course. Make it impressive. I think that’s what we need more of now, to get everybody involved in the game.

“It’s tough, golf is a different kind of sport,” Hicks conceded. “I think if you get the young kids involved at an early age, try to keep ’em hooked. Less stringent maybe rules and policies and etiquette and stuff like that. I think that has to be looked at. But I think just giving young people a chance from all walks of life to discover the game — not just football, basketball, baseball and the mainstream sports. Get a golf club in their hands somehow, some way, that’s the way we gotta go.”

For more from Hicks, including his take on his most famous calls and what makes the essence of a good broadcast, subscribe and listen to the full interview below.