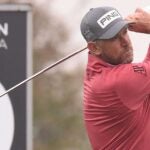 Lee Westwood during Friday's second round of the Italian Open.

Lee Westwood hit his second shot on the 470-yard, par-4 12th hole at Chervo Golf Club in Brescia, Italy, onto the green. He had about 20 feet left for birdie.

Westwood hit his second second shot onto the green, too. This one was closer. About 8 feet away.

It was legal. All good, according to the rule book. Nothing to see here. Move along.

Westwood’s first shot had hit a power line not all that much wider than a golf hole.

“What are the chances?? First time it has happened to me in 27 years of professional golf,” Westwood tweeted.

Because Westwood’s first second shot during Friday’s second round of the European Tour’s Italian Open brushed one of a bunch of power lines that stretch above the 12th fairway, “Local Rule E-11,” which falls under special or required relief procedures, was then applied.

“If it is known or virtually certain that a player’s ball hit a power line or tower or a wire or pole supporting a power line during the play of specify hole number, the stroke does not count,” says the rule, which is also applied for the wires above the 2nd, 4th and 5th holes at Chervo. “The player must play a ball without penalty from where the previous stroke was made (see Rule 14.6 for what to do).

“Under rule 14.6.a, if a stroke is made from the Teeing area, the original ball or another ball must be played from anywhere inside the teeing area (and may be teed).

“Under rule 14.6.b, if the stroke is made from a general area, penalty area or bunker, this original ball or another ball must be dropped in this relief area, no nearer the hole. The shot should be replayed within one club-length of where the previous stroke was made (which if not known must be estimated).”

During Thursday’s first round, Matt Wallace hit the same series of power lines on his second shot. But his ball bounced astray. He was able to drop, then hit to within about 6 feet and made the birdie.

“Now I think he’s hit one of the wires that run across this hole,” an announcer on the broadcast said after Wallace’s first second shot. “He would have to play that again, which can be quite annoying when you hit a good one.”

His caddie flipped him another ball. Westwood took his drop. Then hit to within the 8 feet – and rolled in the birdie putt.

“Not always easy to refocus,” one announcer said of Wallace’s putt. “Well done.”