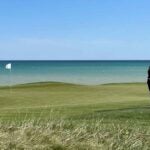 With no grandstands on the lakeside of the holes, seating for fans is limited this week.

HAVEN, Wis. — It would be wrong to call the vibe at this Ryder Cup subdued. That’s not at all the right word.

When Tony Finau stuffed his approach at the par-4 9th in his fourball match Friday afternoon, chants of “To-ny! To-ny” cascaded down upon him from thousands of fans lining both the towering corporate hospitality structure to the right of the fairway and the hillside on the opposing side of the hole. As the chants died out, another lusty cry followed from a Cobra Kai devotee: “Sweep the leg, Tony!” Minutes later, Finau holed his ensuing birdie putt and raised a hand to his ear, the international sign for “I can’t hearrrr you!” The crowd responded with a mighty roar.

This Ryder Cup largely has sounded like a Ryder Cup, but there is also one stretch of the Straits course where this event has felt decidedly unlike a Ryder Cup.

That’s not a knock on the Wisconsin fans, who have come out in star-spangled force this week. It’s an effect of the extraordinary piece of property upon which this 43rd Ryder Cup is being played: a dunesy, windy Pete Dye masterwork that extends along two miles of Lake Michigan. If you don’t watch your step, you can easily tumble into one of the nearly 1,000 bunkers that pepper the course, or slide down the slick fescue-lined mounds that flank every hole. All of this wild landscaping makes the Straits course difficult to navigate, both for fans and tournament organizers alike.

During the Friday afternoon fourball session, I strolled out to follow the Justin Thomas-Patrick Cantlay vs. Tommy Fleetwood-Viktor Hovland match. By the time I caught up to them, they were on the par-5 2nd, where hundreds of fans were standing beneath the green straining for a view, as you’d see at any big-time golf tournament.

But as the match progressed down the rugged coast to the par-3 3rd, the par-4 4th and to the southernmost point of the property — the tucked-away back tee at the par-5 5th — a strange thing happened. This Ryder Cup started to feel more like a Walker Cup. No grandstands, no scoreboards, no head-rattling roars, partly because of the sound-muffling wind howling off the lake and partly because on this part of the course there’s just no good place for fans to follow the action.

It was just four guys playing golf. Well, four guys and more than a hundred assorted hangers-on watching the match from inside the ropes, ranging from wives and mothers, to coaches and captains, to ShotLink operators and heat-packing wardens.

When the group reached the 5th fairway, a double dogleg that slithers between two ponds and is more removed from the rope lines than any other hole on the property, there were seemingly more spectators watching the action from within the ropes than there were from outside. At an event famous for its noise, the quiet was eerie, or, at the very least, odd.

On the 6th tee, the mood began to liven again with a cluster of fans crowding the area to the right of the tee box on the drivable par-4. As Thomas and Cantlay launched a couple of 3-wood missiles toward their targets, fans hooted. The players trekked up the hill toward the green and encountered the first grandstand since the raucous arena at the 1st tee.

Cantlay looked up and nodded. Then he raised his pointer finger to his lips.

Quiet, please. Fleetwood was trying to play his shot.