Yes, there are European fans at this Ryder Cup, but good luck finding them 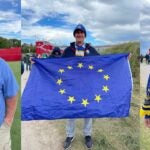 Few and far between: European fans at Whistling Straits on Thursday.

HAVEN, Wis. — The wind died down Wednesday at Whistling Straits, but the energy did not. At just after noon on the final practice day before the 43rd Ryder Cup commences, Brooks Koepka, Tony Finau, Daniel Berger and Harris English marched into the arena that surrounds the 1st tee and were greeted by a roar that could have made ripples in Lake Michigan. Seizing the moment, U.S. vice-captain Jim Furyk stepped into the middle of the tee box and began leading a U-S-A chant that whipped the crowd into even more of a frenzy. Then it was Berger’s turn. The Ryder Cup rookie cocked an air cannon and began launching T-shirts into the stands.

When it comes to the on-site fans, every Ryder Cup is a lopsided affair, with the home team enjoying the vast majority of the support and cheers. But this is a year unlike any other. With travel restrictions preventing most would-be European fans from making the trip across the Atlantic, the scene at Whistling Straits is as decidedly pro-America as any Ryder Cup in the modern era.

On Wednesday afternoon, I strolled the property for nearly two hours and encountered exactly three spectators donning the blue and gold of Europe. Three! From tens of thousands! Ole, ole, ole? Not today, today, today.

Haydn Grounds was one of the few, the proud. A Maryland-based retiree by way of Brighton Beach, England, Grounds bought his 2020 Ryder Cup tickets more than two years ago, unaware of the global pandemic that would lead to postponing the event a full year. But he didn’t let the long wait for this week quell his enthusiasm. On Wednesday, Grounds was walking along the 1st hole with an E.U. flag covering his back like a superhero’s cape and a matching ski hat. (He said he might break out his Poulter visor on Friday.)

“I was surprised by how few there are,” Grounds said of the Euro fans. “There are few more people here today so maybe we’ll get our voices heard. I do feel a sense of obligation to let the team know they’re not on their own.”

That obligation had materialized earlier in the day on the 1st hole, Grounds said, when he countered a grandstand-rocking U-S-A chant with his heartiest one-man Ole Ole Ole. “A few people seemed to enjoy it,” he said.

I bid Grounds farewell and resumed my quest in the vast sea of red and blue and fescue. Among the masses were a Ben Franklin lookalike typing madly away on his phone; a woman in a stars-and-stripes jumper suit; and a twentysomething in a t-shirt covered with photos of Tiger Woods’ greatest moments. I was starting to feel hopeless when in the distance I spotted a beacon in the darkness: a blue-and-gold tam o’shanter.

Beneath it was Andrew Rogers, an expat Welshman who now drives trucks across this great land.

Rogers is behind Team Europe but he also had a specific rooting interest on Thursday afternoon: carrying the bag for Bernd Weisberger was Stuart Morgan, a performance coach from Rogers’ hometown in Wales. Rogers said he watched every group come through the 1st tee. Any semblance of European support? Very little, he said, although he did hear a “very minor chant of Ole Ole Ole, and it was immediately snuffed out.”

“The European fans are very sparse, unfortunately,” he said.

I wandered on, out toward the 8th hole. Lake Michigan revealed itself, an endless expanse of blue but alas not gold. Star-spangled spectators lined the fairway and crisscrossed the area between the 8th green and 9th tee but there were no visual signs of support for the continent. Stomach growling for lunch, I began the trek back to the press center. More red, more blue, more stars, more stripes.

And then … there he was.

Blue hoodie, a Team Europe cuffed knit hat, a bag full of Euro merch in his right hand — and, wait, was that a … Wisconsin accent?

His name was Adam Zahn, and this was his second Ryder Cup; his first came nine years ago at Medinah. And, yes, he was pulling for the Europeans then, too. He’s 42 now but his Euro allegiance was spawned as a teen when he started playing EA Sports’ PGA Tour on his Sega Genesis. Soon after, he picked up the European Tour version of the game.

“I got that right away and was I like, This is way better,” he said.

A Euro fan was born.

In college, Zahn’s friend ran a Masters pool for which Zahn would pick only European players. His friends, he said, soon followed suit. “They all came over to my side,” he said. “They all like the Euros now, too.”

Zahn’s wife was at his side, but unlike her husband, her apparel said nothing about her own loyalties. U.S.? Europe? Neutral?

“No, I support the Europeans, too,” she said meekly.

“She better not be neutral,” he said.