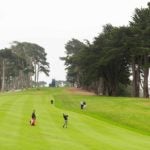 The players had Harding Park more or less to themselves on Tuesday.

SAN FRANCISCO — A PGA Championship unlike any other is underway, and on Tuesday at Harding Park it was as quiet as church. With no fans on property — and only skeleton crews of reporters, volunteers and player entourages — the competitors enjoyed peaceful, intimate practice rounds. Dustin Johnson, waiting to begin his stroll around Harding Park, spoke loudly into a cellphone. (He was requesting a “52”; presumably that’s the degrees on his gap wedge, not the size of his blazer.)

Standing on the rope line, it was so quiet you could eavesdrop on the conversations in the middle of the fairway. Danny Willett pured a 6-iron and his swing coach Sean Foley offered a one-word verdict: “Cheeky.” Foley later recommended some reading for these complicated times: Between the World and Me and The New Jim Crow. Phil Mickelson (who flexed in shorts on a foggy, blustery day so frigid Gary Woodland was wearing rainpants for extra warmth) dropped a trio of balls in the 10th fairway and feathered short-irons through the breeze, consulting a Bible-sized launch monitor after each swing. “It’s heavy,” he said of the coastal air.

To be sure, the players have grown accustomed to performing in a vacuum ever since the Tour restarted two months ago without galleries. But this is a major championship, and Tuesday at the PGA traditionally has some of the biggest, unruliest crowds of the season. The competitors certainly felt the difference this time around. “I definitely miss having the fans out, just to give you that extra rush and energy of major championship golf and just championship golf in general,” Tony Finau said.

Still, the players could have noticed some subtle differences about this tournament compared to the everyday Tour events that have preceded it, beginning with the towering media center tucked between the first and 10th fairways, a reminder that there is history to be written this week. (The press tent accommodates 50 folks in a social-distanced manner, maybe a fifth of the turnout at a PGA played without the specter of the coronavirus.)

“Just for the sheer fact that we have way more infrastructure than we are used to every other week, it already feels a little bit different,” Jon Rahm said. “You know, major championship weeks, you don’t need anything special or [even] spectators to make us aware or make it known that it’s a major championship, right? It just feels like it. You’re aware of it. It’s as simple as that.”

Rahm added that the vibe will be most acutely different on Sunday afternoon. “The atmosphere will not be the same, and I can say from experience that when you’re coming down the stretch and you’re hitting some shots and you don’t know what’s going on, you don’t know what the people in front of you are doing and you’re hitting shots into the green and you don’t know how close they can be, it’s very odd down the stretch,” he says.  “I think a major even more so when on the back nine on Sunday you can [usually] feel the roars and hear it and just tell what’s going on before they post it on the boards, right?”

But there is so much golf to be played before we get to that point.

On Tuesday, as supper time approached, the putting green was packed and players were still making lazy practice swings on the 10th tee, waiting for the fairway to clear so as to squeeze in nine more holes. Fog was wafting through the cypress trees, stooped as they are like old men having grown weary of standing up to the wind. The tension is building at the first major championship of 2020, but it’s still only a whisper.