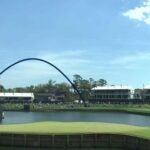 It all started as Todd approached the famed island green 17th hole at TPC Sawgrass on Sunday. When he teed up his Titleist, he stood five under for the tournament with two to play. Birdies on both of the famed closing holes would climb the 35-year-old to seven under on the week, perhaps even in range to snag a backdoor top-20 finish.

Todd stared down the tucked Sunday pin placement — three paces from the left edge and roughly three from the front — and pulled a pitching wedge. To that point in the week, he’d made two birdies in three tries on the vaunted hole. A smooth swing would ensure at least a look at a third.

What followed from Brendon Todd was not a smooth swing. In fact, what followed could hardly be considered a proper golf shot at all. Rather, it would be more accurate to refer to Todd’s swing by its natural name: a cold-blooded shank. Immediately after the club launched into the ground, the ball careened to the right; a low, piercing line drive.

As the ball’s hindered trajectory cratered back to earth, it was immediately apparent that it would not come to rest on the island green. However, it did have a chance of landing somewhere dry: the 17th’s OTHER island.

That landmass, which claims several flowerbeds, a large tree and an osprey’s nest among its handful of occupants, is roughly one-third the size of its better-known brother. The other island on No. 17 is so small, so insignificant, and would require such a significant miss to reach, many people don’t even know it exists. But there was Brendon Todd’s golf ball, tracking directly toward it.

Anti-climactically (though perhaps fortunately for its owner), Todd’s ball whistled just above the other island’s wood paneling and skipped into the lake below. Todd looked around, then began to laugh. His shank would not be remembered as the one that made history on the other island, but rather yet another in a long line of water balls on No. 17. [Rules] Crisis averted.

As for what would have happened had Todd’s ball actually landed on the green, PGA Tour rules official Slugger White told GOLF.com the player would have a pair of options. The first (and far most likely) is for the offending player to take a drop or re-tee. The other option is for the shanker in question to hop in the water, swim out to the island with his golf club, and play his original ball.

“But I wouldn’t recommend it,” White said. “There’s too many gators in there, for one thing, and it’s deep.”

Todd would go double-bogey/birdie on Nos. 17 and 18 to finish his tournament at three under. And on the bright side, with the real estate market booming in Ponte Vedra, perhaps there are worse outcomes than staking your name on lakefront property on the stadium course.

Come to think of it, “Todd Island” does have a certain ring to it.