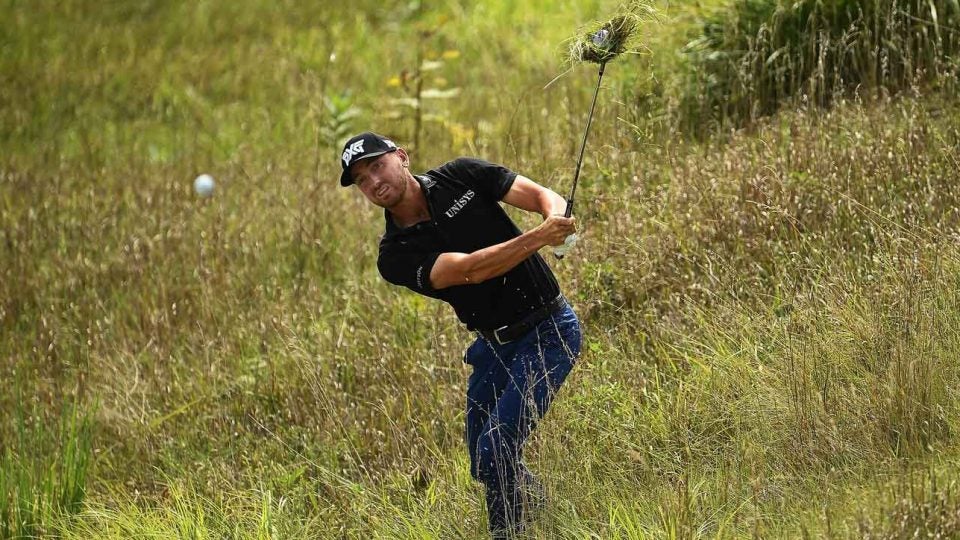 Kevin Dougherty during the second round of the 2019 Korn Ferry Tour Championship on Saturday.
Getty Images

On Monday, 75 pro golfers will battle for 25 PGA Tour cards in the final round of the Korn Ferry Tour Championship. Kevin Dougherty should be among them, but a disastrous double bogey on his final hole of the tournament ended his hopes in heartbreaking fashion.

Dougherty entered the Korn Ferry Tour Championship already feeling snakebitten. The 28-year-old went through a rough stretch recently to finish 26th in the regular season standings. The Top 25 earned their cards, but Dougherty was on the outside looking in.

But he still had a solid chance to graduate to the PGA Tour. That’s because the top 25 finishers at the season finale also earn their cards, and Dougherty began the week in 21st place.

He opened with a disappointing even-par 72 on Friday, leaving him in the middle of the pack and in need of a solid second round to make the cut and keep his dream alive. Arriving at the 18th hole on Saturday, Dougherty was comfortably within the cut line by two shots, needing only a bogey to stay alive.

But it would prove to be too much for the journeyman pro to handle. After over-cooking his drive into trouble, Dougherty ended up making a double-bogey 6 on the hole, finishing with a one-over 73.

“The worst part was I hit a perfect drive on 18 and picked up my tee,” Dougherty told Golf Channel on Saturday. “… somehow it went a lot further than we were expecting, which got me into some serious trouble.”

The double bogey caused Dougherty to miss the cut by one shot. That result means he will not earn his PGA Tour card for 2019-20 and instead will have to return to the Korn Ferry Tour in 2020 to once again battle it out for PGA Tour status for another season.

“Right now, it hurts a lot,” Dougherty told Golf Channel. “…but it’s a long journey. It’s going to make me better and shows me that I’ve gotta get better. I don’t like being on the bubble.”

Believe it or not, this isn’t Dougherty’s first experience with this species of heartbreak. Last season, he missed out on his Tour card by one shot when a near chip-in failed to drop.

The final round of the 2019 Korn Ferry Tour Championship begins Monday morning, with the final group of Tom Lewis and Lanto Griffin teeing off at 1:45 p.m. ET.