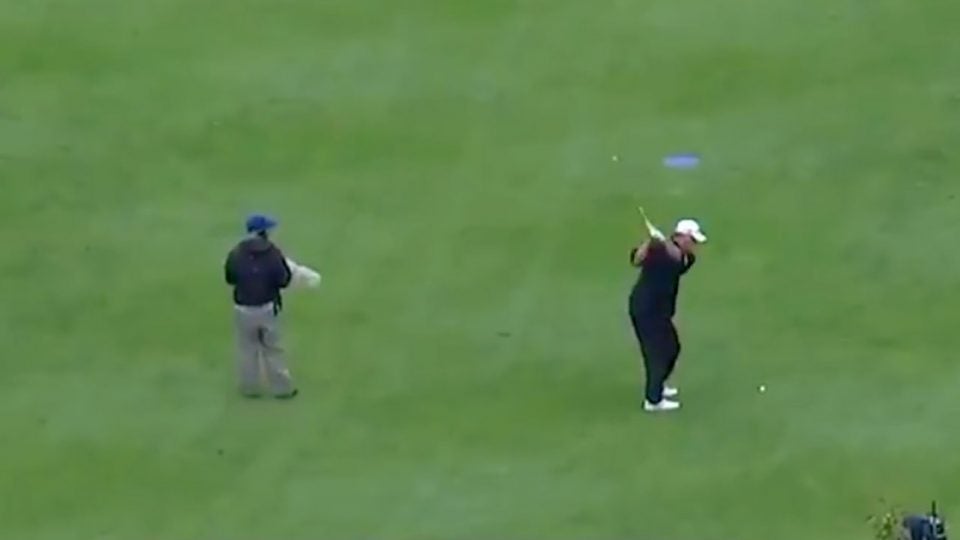 Wes Short Jr. hits his second shot on the final hole of the Shaw Chartiy Classic on Sunday.

Wes Short Jr. is the latest champion on the aptly-named PGA Tour Champions for the first time in five years. But his lengthy winless streak would have continued if not for the help of a rock and what might be the luckiest break a pro golfer has received all year.

Short was playing the par-5 18th hole at Canyon Meadows Golf & Country Club during the final round of the Shaw Charity Classic on Sunday locked in a three-way tie for the lead. Knowing he needed a birdie to capture the second Champions Tour win of his career, Short decided to be a hero and go for the green in 2. One thing in particular made that decision a risky one: a water hazard hugs the right side of the hole, perfectly guarding the back right pin placement.

Short hit “a little bit of a thin 3-wood” and then watched helplessly as his ball soared towards the water hazard, certain he hadn’t hit it far enough to the reach the green.

“Yeah, you know, when I saw it in the air and I pushed it and I caught it just a hair thin, I was thinking I hope it just carries the water because I know it’s not getting to the green,” Short recounted after the round.

Fortunately for Short, his ball did carry the water, but just barely. The ball came crashing down directly on a lakeside rock, ricocheting high into the air. Miraculously the ball fell out of the sky right onto the green about 50-feet from the hole.

Check out the serendipitous shot below.

Can’t make this stuff up …

Wes Short Jr.’s second shot into the par-5 18th looked like it was heading into the hazard.

Thanks to the help of a rock, the ball landed on the green and Wes went on to make birdie for the @ShawClassic win. pic.twitter.com/KAQY6KDobi

From there, Short was able to successfully two-putt for his birdie and a final-round 66, moving one shot in front of clubhouse leader Scott McCarron. It was Short’s first victory in almost five years, having previously won the Quebec Championship in 2014.

And it couldn’t have come at a better time for the veteran of the senior circuit. The win vaulted Short up to 19th place in the Charles Schwab Cup standings with the start of the playoffs looming in just a few weeks.

But for Short, the feeling of finally capturing another win was a good enough reward on its own.

“Finally all the hard work you put into this stupid game comes to the top,” Short said after the win. “…it’s hard to win out here. It seems like McCarron and all them have a pretty easy time of it, but for most of us it’s not that easy. I’ve had some of my chances and you’ve got to take advantage of your chances, and today I did.”