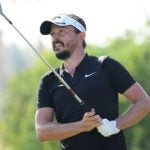 Mike Lorenzo-Vera hits his tee shot on the 14th hole at the Jumeirah Golf Estates on Saturday.

Mike Lorenzo-Vera, on the 621-yard, par-5 13th hole at the Jumeirah Golf Estates in Dubai, United Arab Emirates, was about 20 yards from the right edge of the green. The pin was about 10 feet in from there. Or, more simply put, he would need a prayer to get his third shot close.

“My religion is @philmickelson,” Lorenzo-Vera wrote on Instagram. “Had to show respect to my god.”

Lorenzo-Vera hit his shot nearly as high as he hit it far during Saturday’s final round of the European Tour’s Golf in Dubai Championship. The Phil flop. Lorenzo-Vera took a full swing with his wedge, the ball was in the air for about two seconds, and it landed maybe an inch from the fringe before rolling to about 2 feet from the cup.

“Wow. What a shot. Shot of the day,” a commentator said on the broadcast.

“What a shot,” another commentator said.

“There was so much that could have gone wrong with that,” he continued. “So much. … He could have de-lofted it. He could have caught it very high in the clubface and not have reached the putting surface.”

Lorenzo-Vera smiled after the shot, handed his wedge to his caddie and grabbed his putter. He would make the birdie putt on his way to a seven-under 65 and a 23-under total, which tied him for second place.

“Full swing to hit it 10 yards,” the first commentator said. “Great shot from Lorenzo-Vera. He smiled. He loved that. He knew how difficult that was.”

“I mean that’s hard enough to do on a Thursday or Friday, let alone on a back nine on a Sunday when you’re in contention,” the second commentator said.