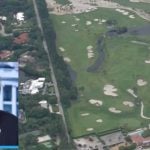 President Donald Trump called into the skins match at Seminole on Sunday.

President Donald Trump phoned into the TaylorMade Driving Relief charity skins match on Sunday to discuss his relationship with pro golfers, getting fans back into the stands, Covid-19 testing for athletes and more.

Trump spoke to NBC Sports’ Mike Tirico midway through the broadcast — which featured Rory McIlroy and Dustin Johnson facing Rickie Fowler and Matthew Wolff — for about five minutes and touched on several topics. Trump has long been a huge golf fan, his organization owns several courses and he spends much of his time out of the White House at his golf clubs Mar-a-Lago, in South Florida, and Trump National, in Bedminster, N.J. His Blue Monster course at Trump Doral hosted a WGC event on the PGA Tour through 2016, and he’s friendly (and has played golf) with several pros, Tiger Woods among them. Here’s a quick rundown of what Trump said during his interview with Tirico.

“I love golf, I love even the exercise,” he said. “Sometimes it’s not as much when you are running around in carts for speed, but it’s a great game and it’s really so good to see these great players playing, and I know them, and they are really terrific people.”

On what he talks about when he plays golf with pro golfers:

“A lot of them are very political, actually,” Trump said. (McIlroy, who has played golf with Trump before, said just a few days ago he won’t do it again.) “Some to them like my politics very much and probably some don’t. I guess the ones that don’t get to see as much, but they seem to like it. I know so many of the Tour players and they are really fantastic people. I can’t think of anyone I don’t like. I can’t say that necessarily in life, but when you meet these Tour players they are just great people.”

“It amazes me how Rickie is,” Trump said. “He’s not as big as some people but he’s a very strong guy and hits it a long way. And he’s a great player, and he had one year where he came in second in the majors, in four majors, he came in second [in 2014], and that’s quite an achievement. I don’t know if he’d trade it for one [major title]. I actually asked, Would you trade it for one? And he might have said yes. He’s a great player, he’s going to have majors. He’s going to have lots of wins, and he’s a tremendous guy. Great personality.”

On discussions with his advisory panel, which includes many high-profile sports (and golf) figures, and getting fans back at events:

“Golf was very well-represented with so many of your friends, and the commissioners and all of the people, heads of golf, and also the other sports,” he said. “We want to get sports back. We miss sports; we need sports in terms of the psyche of our country. I had great chats with [PGA Tour commissioner] Jay [Monahan], I had great talks with [PGA of America CEO] Seth Waugh, anybody having to do with the sports. Some are on the commission and some aren’t. They have called me up individually. But we are getting it back, Mike. We are getting it back and it’s going to be fast. We’ll start with small crowds, if any … we want to get it back to where it was. We want big, big stadiums loaded with people. We don’t want to have 15,000 people watching Alabama-LSU, for example. And when you have the Masters we want to have big crowds. Right now that’s not what they are planning but you never know what happens. Things can happen very quickly. We are looking at vaccines, we are looking at cures. We are very, very far down the line. I think people are going to be very impressed with what is being developed right now.”

On how to balance testing for pro athletes vs. regular citizens:

“The athletes will be tested very carefully and the people that want to go can be tested very carefully, and ultimately I believe we’ll end up with a cure and/or a vaccine, probably both, and I don’t think that’s going to be in the very distant future,” he said. “And even before that I think we’ll be back to normal. I think after that hopefully it will be back. We really want to see it get back to normal. So when you have all those tens of thousands of people going to majors and going to golf tournaments, we want them to have that same experience and not have to wear masks and doing what we have been doing for the last number of months, because that’s not getting back to normal. We want to be back to normal where you have the big crowds and they are practically standing on top of each other and enjoying themselves, not where they are worried. But in the meantime we do the social distancing and they practice that and they’ve bee doing really well. The county is ready to start moving forward.”