PHOTOS: The best from the Ryder Cup Opening Ceremony 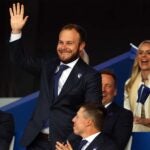 The 2021 Ryder Cup is officially underway! Now all that's left to do is watch the golf.

Though the first tee shot has yet to be hit, the 2021 Ryder Cup has officially kicked off at Whistling Straits.

The morning foursomes matches have been announced, and all that’s left now is for the real golf to finally begin. In the meantime, enjoy a look back at some of the best photos from the 2021 Ryder Cup Opening Ceremony from Thursday night.