Phil on potential pairing with Tiger: ‘We’d both welcome it’

SAINT-QUENTIN-EN-YVELINES, France — Over the summer, U.S. Ryder Cup captain Jim Furyk was asked on the Golf Channel if he’d consider pairing Tiger Woods with Phil Mickelson, should they both make the Ryder Cup team. He laughed it off.

“I hope they’re both watching, because they just fell off the couch laughing,” he said at the time. “I wouldn’t guess that would be a good idea as a captain, I’m just saying.”

But he cautioned media members from drawing conclusions from Tuesday’s practice round pairings. Before their press conferences, Woods and Mickelson played with Bryson DeChambeau and Patrick Reed.

Mickelson let on that he knows more about potential pairings. “I do have an idea of what Captain Furyk is thinking, yeah,” he said. But when he was asked to follow up, he deflected with a joke. “What a good-looking man you are,” he told the reporter.

Though he was reluctant to address it at first, Mickelson expounded on why the pairing didn’t work when the two were paired together in 2004.

“So when we go over like little details as to why we were or weren’t successful, when I talk about it openly and try to share insight, sometimes it comes across as though I’m taking — like I’m trying to take a shot at somebody, and I don’t want to do that,” he said.

“So I’m not going to go into that anymore. The bottom line is going to be preparation. When we can eliminate the variables; eliminate the uncertainties, it eliminates the pressure. So the more questions we have answered well before the Ryder Cup, the more prepared we are and the better — the more time we have to prepare our games the week of the Ryder Cup.

“And so that’s probably the best way to answer it. I’d say we would be more prepared, most likely, would be the general answer. But if I answer that, it never comes across — if I try to share an insight as to why things went well or didn’t went well, it always comes across as I’m taking a shot at somebody, and I don’t want to do that anymore.” 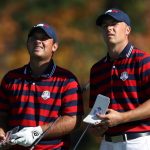 You may also like Tiger and Spieth! DJ and Bryson! A stats guru reveals the optimal Ryder Cup foursome pairings

Rumors were swirling that Mickelson was testing a Bridgestone ball at last week’s Tour Championship, which would indicate prepping for a pairing with Woods or DeChambeau. Will either come to fruition? We’ll know by Saturday afternoon.