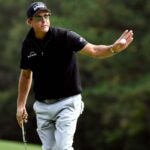 Journeyman Jason Kokrak was the big winner on the PGA Tour last week, but golf on the other tours was just as compelling. Here are three stories you might’ve missed.

Adrian Otaegui storms back in Scotland

Adrian Otaegui’s week at the Scottish Championship was bookended by superb play. The Spaniard opened the event with a 62 in Round 1 and he found that magic again in the final round as he fired 63 to claim a four-stroke victory.

“If you told me I was going to shoot 63 this morning, I wouldn’t believe it,” Otaegui said. “Everything went well, I played very well, I felt very well, I was very focused, and I holed some good putts. It’s been a very good week and especially today was a very good day to finish that week.”

Otaegui began the day four shots behind the 54-hole pace of Matt Wallace, but a stretch of eight birdies in 11 holes in the middle of his round vaulted him up the leaderboard as he easily surpassed the Englishman.

The win was Otaegui’s third of his European Tour career and his first in a stroke-play event.

“I feel so happy,” he said. “To be able to win in Scotland, especially here in St Andrews, the home of golf, it means a lot to me.”

Phil Mickelson gets another win on senior circuit

To say Phil Mickelson’s Champions Tour career has gotten off to a good start would be an understatement. In two starts on the senior circuit, Mickelson has registered two wins, becoming just the third player to win their first two starts.

Mickelson claimed the title at the Dominion Energy Charity Classic on Sunday, firing a closing 65 to best fellow lefty Mike Weir by three shots. Mickelson birdied four of his last six holes as he pulled away from Weir late to secure the win.

“What a fun week,” Mickelson said. “We’re only a month away from the Masters, and this was a good way to get the momentum going.”

Mickelson will head to Augusta next month looking to become the oldest winner in Masters’ history. If he’s able to conjure up the magic he’s displayed on the Champions Tour, it’s certainly not out of the question.

The coronavirus pandemic has claimed another victim on the golf schedule.

“It’s unprecedented and a real blow for Australian golf and its fans,” said PGA of Australia chief executive Gavin Kirkman. “But even with multiple contingency plans, it has reached a point where decisions have to be made and this, regrettably, is the one we’ve had to take.”

The events were originally scheduled to be played in late November and early December of this year but were postponed to February in hopes of staging the events safely. But after consulting with various agencies and health officials, the events have been scrapped altogether for this season.

“We look forward to bringing all three tournaments alive again when they return as normal for summer 2021-22,” Kirkman said.