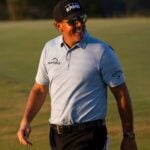 Phil Mickelson shot a seven-under 64 on Tuesday at the Charles Schwab Series to take a big lead.

Dustin Johnson finished with an insane to-par score of 30 under at last week’s Northern Trust. Phil Mickelson won’t one-up him on Wednesday, but he could come close… and in only three rounds.

Mickelson followed up his first-round 61 with another dominant performance of seven-under 64 on Tuesday at the PGA Tour Champions’ Charles Schwab Series at Ozark National. The stellar score left Phil at 17 under through two rounds, and, more importantly, gave him a four-stroke lead with 18 holes to play.

Phil’s second round featured eight birdies — a slight step back from the 11 birdies he made on Monday — and one bogey. The lone drpped shot came at the par-4 10th, where he “made a mistake hitting the wrong club off the tee,” overcooking his driver out of bounds. No matter. Phil made birdie with his second ball to save a 5.

In case you haven’t heard, this is 50-year-old Mickelon’s first-ever tournament on the senior circuit, which he became eligible for on his birthday in June. Some thought it would be a long time before we actually saw him compete on the Tour, but after getting knocked out of the FedEx Cup Playoffs last Friday, Mickelson decided at the last minute to make his debut.

“I’m really enjoying the competition, I’m enjoying playing here,” Mickelson said after his round on Tuesday. “I’m enjoying the carts, really nice. So I’m having a fun time, but I want to play a little bit sharper tomorrow than I did today.”

Phil’s closest competition heading into Wednesday’s third and final round are Tim Petrovic and Rod Pampling who sit at 13 under. 2008 U.S. Open runner-up Rocco Mediate is one shot further back, and 2021 Ryder Cup captain Steve Stricker is T6, but a distant seven shots off the lead.

The bad news for them is that Mickelson has no plans on taking his foot off the gas. In fact, he hopes to fix a few things and make even more birdies in the final round.

With his commanding lead, it should only take a few birdies for Phil to go from “hard to catch” to impossible to catch, and for him to capture his inaugural Champions Tour victory. He tees off in the final group Wednesday morning at 10:10 a.m. ET.