Where’s Phil Mickelson? A timeline of his controversial 2022 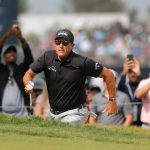 Phil Mickelson won the 2021 PGA Championship, but he won't be in Tulsa to defend his title this week.

Golf’s most conspicuous absence made news again this weekend with the announcement that Phil Mickelson will not be part of the 2022 PGA Championship. The six-time major champion, who last pegged it in a tournament in early February, has been keeping a low profile since the middle of that month, when controversial comments he made about a Saudi-funded golf league were published in an excerpt of a forthcoming biography of him.

As fallout from his remarks rained around him, Mickelson issued a public apology and said he planned to take “some time away.” But out of sight is not the same as out of mind. Mickelson has remained a steady source of headlines. As practice rounds get underway at Southern Hills, in Tulsa, in advance of this year’s second major, here’s a timeline of notable moments leading up to word that Mickelson will not defend his title in the PGA Championship.

In comments to the writer Alan Shipnuck of The Fire Pit Collective, published in an excerpt of Shipnuck’s forthcoming unauthorized biography of Phil, Mickelson underscores his support for the LIV Golf Invitational series, a Saudi Arabia-funded golf league, while not exactly praising the Saudis themselves. Rather, he calls them “scary motherf——” with a “horrible record on human rights.” He justifies his backing of the LIV Golf series as a form of leverage against the PGA Tour.

Mickelson’s comments draw sharp rebukes from a number of players, none more pointed than from Rory McIlroy. Speaking after the final round of the Genesis Open, at Riviera, McIlroy calls Mickelson’s remarks “naive, selfish, egoistical, ignorant.” McIlroy adds: “I’m sure he’s sitting at home sort of rethinking his position and where he goes from here.”

An apology from Mickelson, posted on social media, opens: “Although it doesn’t look this way now given my recent comments, my actions throughout this process have always been with the best interests of golf, my peers, sponsors, and fans.”

Mickelson tempers his mea culpa by saying that his comments were taken “out of context” and “off the record” (a characterization that Shipnuck calls “completely false”). Still, Mickelson concedes, “It was reckless, I offended people, and I am deeply sorry for my choice of words.” In closing, he says: “I know I have not been my best and desperately need some time away to prioritize the ones I love most and work on being the man I want to be.”

Asked again about Mickelson a couple of weeks later, McIlroy takes a softer stance: “Look, we all make mistakes. We all say things we want to take back,” McIlroy says in advance of the Arnold Palmer Invitational. “No one is different in that regard. But we should be allowed to make mistakes, and we should be allowed to ask for forgiveness and for people to forgive us and move on. Hopefully, he comes back at some stage, and he will, and people will welcome him back and be glad that he’s back.”

Mickelson may be back someday, but it won’t be at the 2022 Masters. With the tournament just weeks away, word breaks that Phil’s name has been listed on the Masters website under the heading “past champions not playing.” Augusta National confirms the news, saying that the three-time Masters champion has notified the club that he will not be in the mix.

Speaking at his annual press conference on the Wednesday before the Masters, Augusta National chairman Fred Ridley says that the club had not asked Mickelson to stay away. “We did not disinvite Phil,” Ridley says, adding that Mickelson had first alerted him by text in late February or early March that he would not compete. “I thanked him for his courtesy in letting me know,” Ridley says. “I told him that we certainly appreciated that and, you know, told him that I was certainly willing to discuss that further with him if he’d like, and he thanked me, and we had a very cordial exchange.”

Three-time Masters champion and ceremonial starter Gary Player turns up at Augusta with a Saudi Arabia logo on his black jumper and praise for Mickelson on his lips. Lamenting Mickelson’s absence from the event, Player calls Phil the “greatest PR Man on the golf Tour in the last five or X amount of years,” and says that Mickelson should hold his “head up high.”

“Our client Phil Mickelson is officially registered to play in the PGA Championship as well as the U.S. Open.” So reads the statement from Mickelson’s agent. And that’s not all. “We have also filed a request on his behalf for a release to play in the first LIV Golf Invitational in London, June 9-11,” the statement continues.

Exciting, right? Mark it your calendar. But do it in pencil. Plans are not set.

“Phil currently has no concrete plans on when and where he will play. Any actions taken are in no way a reflection of a final decision made, but rather to keep all options open.”

More credible than a Sasquatch sighting, a video posted on social media shows Mickelson playing golf at Rancho Santa Fe Golf Club, a private redoubt just north of San Diego, where he is a member.

Mickelson’s love of gambling has never been a secret. Now comes a number to provide a sense of scale. In another excerpt from the forthcoming biography, Mickelson’s gambling losses are reported to have exceeded $40 million during the four-year stretch between 2010-2014, roughly the equivalent of his estimated annual income during that period.

If Mickelson is going to play in the inaugural LIV Golf event, in London next month, it will be without Tour approval. Like every Tour pro who filed a request for a waiver to compete, Phil’s has been denied.

How meticulous is the monitoring of Mickelson? No detail, it seems, is too minute. When Phil likes, and then unlikes, a pair of tweets, his social media movements make headlines. What were the tweets that Phil hearted and unhearted? One, from media personality Clay Travis, reads: “The NBA, which pulled its All Star Game out of Charlotte over a transgender bathroom bill, is playing games next year in the United Arab Emirates where homosexuality is punishable by death.” The other, posted from an account entitled “offthebookscrypto,” reads: “PGA Tour block rebels including Phil Mickelson and Lee Westwood from Saudi breakaway series #YahooSports#GOLF#P

It’s official. Phil is out. “We have just been informed that Phil Mickelson has withdrawn from the PGA Championship,” reads a release from the PGA of America, the event’s host organization. “Phil is the defending champion and currently eligible to be a PGA Life Member and we would have welcomed him to participate. We wish Phil and Amy the very best and look forward to his return to golf.”