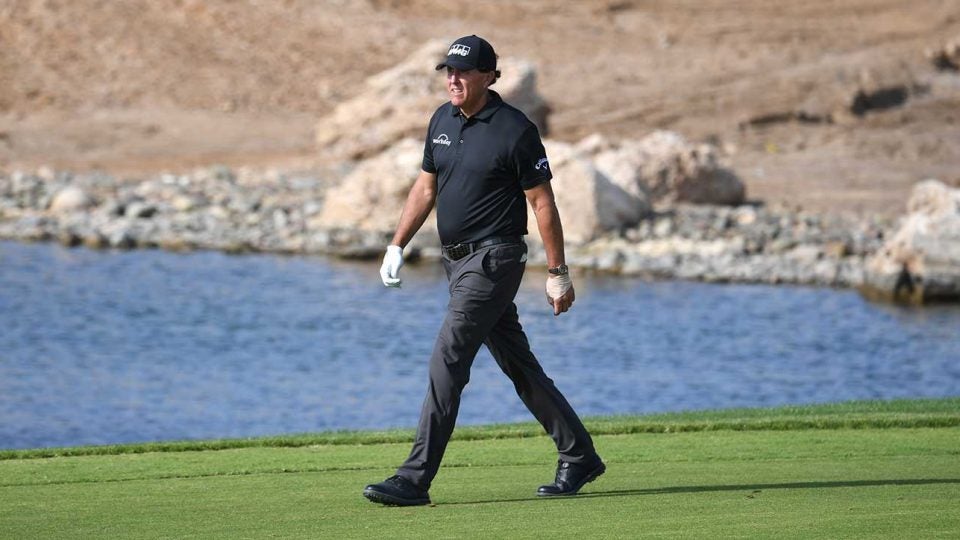 Phil Mickelson walks down the fairway during the opening round of the Saudi International on Thursday.
Getty Images

Phil Mickelson spent his pro-am round at the European Tour’s Saudi International learning more about the possibility of the Premier Golf League, a star-driven big-money tour that could come to fruition in either 2022 or 2023.

News of the possible tour started popping up last week, and several players were asked to comment on it at the Farmers Insurance Open. While most decided to withhold judgment before learning more about it, some were also intrigued.

And Mickelson, one of the most influential players on the PGA Tour, played a pro-am round with some key players behind the new tour on Wednesday at Royal Greens Golf Club

“I had the chance to spend time with and play with the gentlemen in charge of trying to start a new Premier League,” Mickelson told reporters on Wednesday, according to The Scotsman. “It was fascinating to talk with them and ask some questions and see what their plans are. Where they started, how they started, why and just got their background, which was very interesting. I haven’t had the chance to put it all together and think about what I want to say about it publicly, but I do think it was an informative day for me to have the chance to spend time with them.”

According to The Scotsman, Mickelson played with a group that included Majed Al-Sorour, the CEO of the Saudi Golf Federation, U.S. sports consultant Colin Neville and London financier Andrew Gardiner. Neville works for The Raine Group, which was announced as a Premier Golf League partner, and Gardiner is a director at Barclays Capital.

Earlier this week PGA Tour commissioner Jay Monahan sent an email to players about the startup league, and in one portion said players would not be allowed to be members of both.

“I asked a lot of questions today and there are some very interesting ideas and it seems very well put together,” Mickelson said. “I think a huge aspect of it is about the fans. Before I formulate an opinion, I’ll look at whether or not this is a good thing for fans, is this a good thing for sponsors and is it going to be good for television? How does it affect all those involved?”

The Premier Golf League’s current strategy is for 48 of the world’s top players to compete in 18 54-hole events worldwide, and with $10 million purses for each tournament. There would also be individual and team formats.

Mickelson opened the Saudi International with a four-under 66 and is just two off the lead.