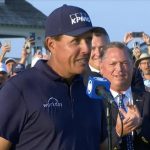 The path back to major championship glory for Phil Mickelson was not a short one.

It’s always difficult to tell which version of Phil Mickelson is standing on the tee box.

Phil. The bomb-hitter. The coffee aficionado. The Twitter fiend. The man whose career has been inextricably tied to the actions and outcomes of one Tiger Woods. The greatest to never win a major. And more recently, the non-contender — the man damned to toil away in missed cuts and rely upon special exemptions.

He’s been all of these things in his career, in part because he’s never been “the guy.” All those years of brilliance were overshadowed by Woods, who was too busy rewriting record books to consider sharing the mantle.

On Sunday, the descriptors faded. Others have won more, won faster and won more convincingly and by a wider margin, but nobody — not even Tiger Woods — has won a major championship later than Phil Mickelson. Fifty years young and still kicking — with enough game to survive a Sunday duel at the Ocean Course with Brooks Koepka, a field nipping at his heels, and a caved-in clubface.

In his post-round interview with CBS’s Amanda Balionis, a new Phil emerged admiring his sixth — and perhaps most impressive — glimpse from the mountaintop.

“I mean, this is just an incredible feeling because I just believed that it was possible, but yet everything was saying it wasn’t,” Mickelson said. “I hope that others find that inspiration. It might take a little extra work, a little bit harder effort, but gosh, is it worth it in the end. I’m so appreciative to be holding this Wanamaker trophy.”

Mickelson has always been a lightning rod of humanity — the Arnie to Tiger’s Jack — but while Woods has long made winning golf tournaments seem scientific, Mickelson makes them look hard. Perhaps this is why he felt so relatable amid the raucous 40,000 or so at Kiawah on Sunday — he’s along for the ride, and so are we.

“I don’t think I’ve ever had an experience like that, so thank you for that,” Mickelson told the crowd. “Slightly unnerving, but exceptionally awesome, so thank you. And for the way you’ve supported the game of golf for so many years, going back to the 1991 Ryder Cup. This place has been a big part of the game of golf, so thank you, everybody here at Kiawah Island and South Carolina.”

So, who is this “new” Phil? He’s a champion, and for once, he doesn’t have to worry about being anything else.

“I just love this game of golf and I love what I do and I love the challenge of competing against such great players,” Mickelson said. “This might be my last win, but I also might go on a bit of a run.”