PONTE VEDRA BEACH, Fla. — After spending nearly an hour post-round inside the building used for scoring at TPC Sawgrass, Phil Mickelson emerged to a group of reporters Thursday afternoon at the Players Championship. “Go ahead, I know what you’re gonna ask,” he told the assemblage. One reporter got halfway through a question about Mickelson being named in this week’s college admissions scandal before Phil himself took over to explain his family’s connection to one of the parties involved, ringleader Rick Singer, and deny any wrongdoing.

“We, along with thousands of other families, hired he and his company to help us guide through the college application process,” Mickelson said. We’re probably more shocked than anyone and we’ve been dealing with it the last few days, but that’s about it.” 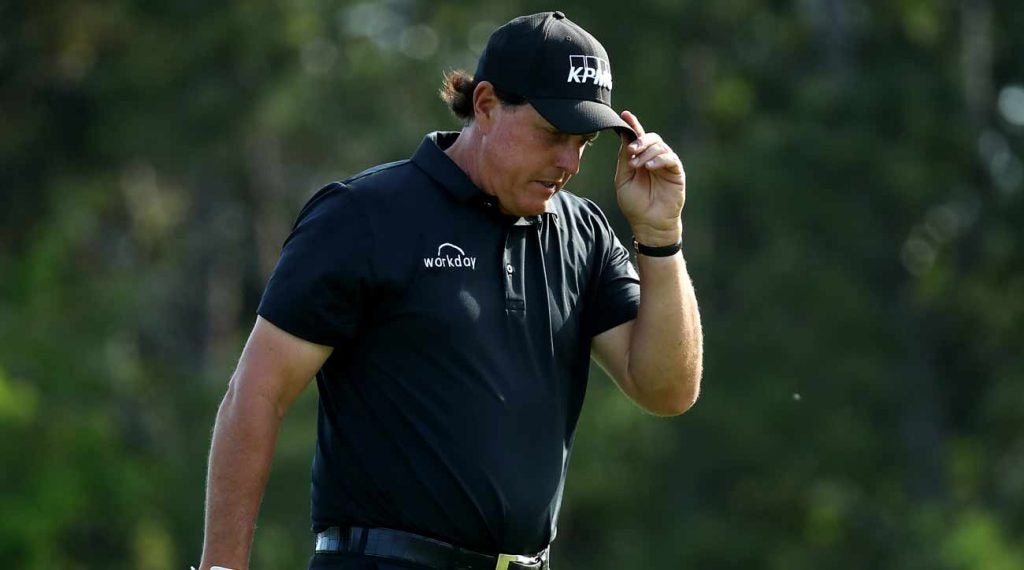 Mickelson’s round with Rory McIlroy and Matt Kuchar finished right around 2:10 p.m. local time. At 2:20, Kuchar and McIlroy emerged, but Mickelson remained in the building. At 3:09, a tweet was sent out from Mickelson’s account denying any connection to the scandal. And at 3:11, Mickelson came out and gamely answered reporters’ questions.

Singer, he said, came “highly recommended by numerous friends,” and was enlisted to help each of Mickelson’s three children navigate the college process.

Amanda Mickelson, Phil’s oldest daughter, is in her sophomore year at Brown University, while his younger two children are a junior and sophomore in high school. But Mickelson said he never sensed anything sketchy about the company. “Our kids are — schools are like, fighting to get them,” he said. “And I say that as a proud dad, but their grades and their outside activities and their worldly views on things have colleges recruiting them, so we weren’t even aware, really.

“We’ve been using his company for three years, know, tutors and we’ve looked at three dozen colleges based on his recommendations, so his company has helped us through this whole process, because it’s been confusing.”

“Our kids are — schools are like, fighting to get them.”

The document initially referenced from testimony was merely a thank-you text from Mickelson’s wife Amy, he said. And the Mickelsons have been working with Singer’s company as recently as the last two weeks, when Mickelson said his family went on tours at eight or nine schools.

“Where he and his company was helpful was helping our kids who have such different personalities find the best place for them. And then knowing going in what you need to do academically and score-wise to be able to get there.”

That meant enlisting the company for tutoring, consulting and more. But Mickelson was adamant that there was nothing untoward about the relationship.

On Tuesday, federal prosecutors charged 50 people in what they called the “largest college admissions scam ever prosecuted by the Department of Justice.” According to the New York Times, scores of parents paid millions in bribes to help their children get into schools through various avenues, including manipulating test scores, paying to secure admission or faking athletic abilities, according to the New York Times.

William “Rick” Singer is at the forefront of those charged. The 59-year-old’s college prep business, the Edge College and Career Network, is at the center of the scheme. He has been working with prosecutors since September, helping them implicate high-profile schools, parents, coaches and more.