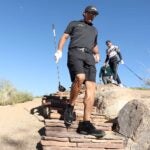 Phil Mickelson and Charles Barkley were the winners on Friday in Arizona.

Did you miss Phil Mickelson and Charles Barkley square off against Peyton Manning and Stephen Curry on Friday? No problem. We got you covered. Mickelson and Barkley won the modified alternate-shot match 4 and 3 at The Stone Canyon Club in Oro Valley, Ariz., a spot owned by Mickelson himself, who unsurprisingly was the star of the event. Here were Mickelson’s best moments from Capital One’s The Match: Champions for Change.

Barkley had just a half-wedge into the green on the par-4 opening hole after Mickelson’s massive drive, but his approach to the front pin landed past the hole and rolled way to the back of the green, leaving Mickelson a long birdie putt.

“That was a good shot,” Mickelson said. “I actually gave you 70 (yards) — it was 55 — but I didn’t want to tell you that because I wanted you to hit it aggressive. That’s my bad. I’m underestimating your ability.”

There was lots of it. One of the first and smoothest moments came from Mickelson, when he was talking to Barkley on the 3rd green. Mickelson drove it onto the fringe on the short drivable par-4 3rd, and as Mickelson was mic’d up discussing the putt with Barkley, Curry chipped his second shot well past the hole and was still away.

“Just tell me what you want me to do, brother,” Barkley said to Mickelson, as they watched Curry’s ball continue to roll away from the hole. “Well, they are away,” Mickelson said. “Eventually, we will have a turn.”

Mickelson and Barkley were in good shape again eyeing a birdie putt on the par-4 5th. Curry and Manning had bigger problems though. Their first two shots went into bunkers, and their third was thinned over the green. Curry chunked the fourth, and they were still out with Manning preparing to hit their 5th shot.

“What is that for?” Mickelson asked. “Is that for 5? … That’s good, we’ll give you that one.” He looked at Barkley. “That’s a strong, cocky move right there. Don’t let it backfire.”

It almost did. Barkley ran the birdie putt about six feet by the hole.

“We don’t want handouts,” said Mickelson, as he pulled the pin and lined up his putt. “We want to earn ours. We have been winning these holes so fast we gotta slow down for television’s sake.” Phil snuck the putt in the corner of the cup for his team to go 3 up after five.

On the 8th, Mickelson hit a drive well right of the fairway destined for O.B., but it hit off a rock and bounced back into the first cut, just inches from the fairway. Driving to his ball, and broadcast team joked with Mickelson, asking how he knew to play it off the rock.

“I own the place,” Mickelson quipped.

Mickelson has never found a shot he didn’t think he could hit. Here was one example on Friday.