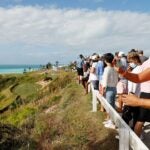 Fans watch the final round of the Bermuda Championship on Sunday.

Which was better than no one.

In this age of distance, Funk was diminutive.

“This guy is pretty damn good for an old guy,” said Funk’s son, Taylor, who played with him for the first two rounds.

“It feels good to know you can do it,” Funk said. “Not many guys even have an opportunity to play this late into their career on a regular Tour event. It’s not like that many guys have done it because not many guys have even had a chance to do it. It means a lot.”