Here’s how the PGA Tour’s new charter-jet plan will work for players, caddies 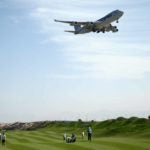 The PGA Tour plans to provide a charter for flights from tournament to tournament (though not the plane pictured here).

As part of the PGA Tour’s plan to return to tournament play, players and caddies will have a new option for inter-city travel: a charter jet.

The Tour will “strongly encourage” players and caddies to use its charter services between tournaments, it said in a release on Wednesday. One charter flight will be arranged from each tournament on the PGA Tour, PGA Tour Champions and Korn Ferry Tour to leave on Monday following the tournament to transport players to the next site.

The document also mentioned a 170-passenger capacity “possibly restricted due to health and safety measures (e.g., one passenger every other seat).” The seats will be reserved exclusively for players and caddies, with player reservations prioritized.

Players and caddies can reserve a spot on the jet through a “first-come, first-served” policy a week before departure.

Players will help offset the costs of chartering the jet by paying for their seats. PGA Tour and PGA Tour Champions players will each be charged $600 per seat, while Korn Ferry Tour players and caddies at all levels will be charged $300. There are refunds available for players or caddies who cancel more than 24 hours early — or if a player tests positive for the coronavirus before the flight.

To that point, all passengers are required to submit to viral testing within 24 hours of the flight’s departure, and every passenger must receive a negative test in order to board the plane, with no exceptions.

Once on board the aircraft, passengers will be provided with “personal protection equipment” and required to follow health and safety measures as dictated by the charter operator. Those measures are yet to be determined. The Tour also has yet to determine potential restrictions on food and beverage as well as baggage.

On a conference call Wednesday, Tour officials acknowledged that not all players and caddies will be able to travel from tournament to tournament via the charter.

“The charter flights will have a limited capacity and won’t necessarily accommodate every player and caddie,” said PGA Tour SVP of Tournament Administration Andy Levinson. “We do know and anticipate that a number of players — and a greater number of caddies — will elect to drive from one city to the next. Players also could utilize their NetJets hours.”

Levinson added that in addition, commercial air travel is “up and running” and that the Tour is confident the industry will put forth stringent sanitary measures that would help ensure player safety.

In short, inter-tournament travel remains complicated. While the theory behind the charter jet is ensuring the Tour remain in a closed loop as much as possible, players and caddies who inevitably use alternate modes of transportation will leave that loop, only to rejoin at the following tournament.

Once they arrive at the next site, they’ll once again submit to the Tour’s protocols — testing, thermal screening, social distancing and more — in the hopes of remaining coronavirus-free.

You can read more about the Tour’s plans here.

How tough were conditions in Abu Dhabi? ‘I’ve never been so glad to get off the course’