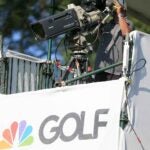 The future is upon us.

It wasn’t an announcement so much as it was a pronouncement — a proclamation from PGA Tour headquarters in Ponte Vedra Beach about the direction of the future of the game. If you’ve been close to golf, or the world of professional sports, or the world of professional gambling, the short blurb that appeared in Sports Business Journal was neither surprising nor transformational. And yet it was the clearest indication yet of where things are headed, and where they’ve been headed for a long time, in the world of pro golf.

Here was that blurb:

“Sportsbook operator PointsBet will provide live betting odds during PGA Tour telecasts on NBC, Golf Channel and Peacock as part of a three-year content and marketing extension that also will include sponsorship of a free-to-play prediction game scheduled to launch in January.”

But in clearer English, the story really said this:

“Sports gambling has arrived as part of golf coverage, and it’s here for good.”

The story itself perfectly captured the PGA Tour’s toes-in-the-water approach to new gambling markets. The Tour’s VP of gaming Scott Warfield is quoted describing the shift as “very light,” and the overall text reads as if the Tour’s approach could change with a shift in wind or horoscope.

The implications, however, are significant. No professional sports body can claim immunity to the vast earning and brand potential provided by the world of sports betting. And no one can claim obliviousness to the market forces that are currently working in the industry’s favor. States are legalizing gambling at record rates, and those where it is already legal have seen unfathomable sums of revenue — sums that continue to grow with each passing month. In August alone, the state of New Jersey recorded $427 million in sports betting revenue, up more than $100 million from the same month in 2020. So far, the state has collected $2.99 billion (yes, with a B) in sports betting revenue in 2021.

The world of sports betting is no longer uncertain, and it is certainly no longer niche. It seems an inevitability that bets and betting will be as entwined with our sporting discourse as beer advertisements and Jim Nantz. Still, a fairly significant question remains for golf: What will that integration look like when it’s fully here?

At Caesars Sportsbook in Washington, D.C. last weekend, I watched as crowds of close to 100 people lined up outside the entranceway prior to the afternoon kickoffs on a college football Saturday. The interior was packed with people and the building was easily the busiest on the street. As the crowds gathered, the first-ever PGA Tour sportsbook, which is set to open in Arizona, seemingly took shape in front of my eyes.

But another small piece of that answer was revealed two weeks ago, when NBC Sports and PointsBet experimented with airing live odds information during the broadcast of the Fortinet Championship — an experiment the Sports Business Journal report confirmed will be part of our Sundays to come on Tour. For those who tune into the action with a vested financial interest, the news is welcome, perhaps even celebrated. Now, those fans will have access to betting information as it happens on their “first screen” — their television — presumably helping to seed more interest in wagering and helping to further inform those who already do. Moreover, the segment is likely to be one of the more palatable forms of sponsorship integration for the PGA Tour, whose telecasts have struggled with forced “activations” for years.

And what will it mean for golf viewers who don’t gamble? Precious little, actually. There is no oppressive force provided by golf’s expansion into betting. Gambling is as old as golf itself — the wager of a match, be it for $1 or thousands, is one of the sport’s oldest traditions. The sport is a natural companion for the world it is soon to greet, provided its stewards are willing to embrace it.

Now seems like a prudent time to admit that I am not a gambler. I’ve never placed a wager on a golf tournament, and — spare for a brief run with the ponies at age 6 using my grandfather’s money — can count on one hand the number of sports wagers I’ve placed in my life. I hate the thought of losing money on a bet more than I enjoy the prospect of winning it. In the truest sense of the word, I have no skin in the game.

So, why do I think we should care about the future of sports betting in golf? In short, because we care about the future of golf. We all see the future of the game in similar colors: bigger; broader; more accessible; more diverse by culture, gender and economic status; with better golf courses and better players — and I’m sure about a dozen other things. Getting from here to there takes time and effort, yes, but it also takes attention, popularity and money. A lot of money.

It’s not difficult to see the earnings potential provided by an infusion of cash from the betting world, partially because we’re capable of seeing it today. With more money comes more investment, and hopefully more attention. There’s work to be done to get from here to there, and a lot of it, but there’s little doubt about the power of rising tides.

It’s clear the game’s stakeholders are ready — if hesitant — for what’s to come. The only question remains, are we?