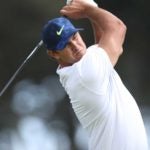 Brooks Koepka is in contention for his third straight PGA Championship.

With the first two rounds out of the way, things get serious on Saturday at the 2020 PGA Championship with Moving Day. Here’s everything you need to know to watch Round 3.

Haotong Li is only 25 years old and holds the lead after 36 holes at the 2020 PGA Championship. Li is in that coveted position thanks to an incredible scrambling performance on Friday that led to a five-under 65. But Li has more than a little company near the top of the leaderboard.

Four-time major champion Brooks Koepka battled throughout the second round to finish with a two-under 68, punctuated by a clutch birdie at the last. Koepka, who has won the last two PGA Championships, is just two off the lead heading into the weekend.

A bevy of up-and-coming Tour stars hope to spoil Koepka’s history-making moment by getting their first taste of major glory. Tommy Fleetwood (six under), Daniel Berger (six under) and Cameron Champ (five under) will try and set up their breakthrough major wins with low rounds on Saturday.

And don’t forget about 2015 PGA champion Jason Day, who has fought off numerous injuries over the years to get his game in fine form just at the right time. Day will also start the third round at six under, within striking distance of Li.

Other fan favorites like Tiger Woods, Phil Mickelson and Jordan Spieth will have tee times on the earlier side Saturday, hoping to claw back into contention with stellar rounds on Saturday.

Below you will find all the information you need to watch Saturday’s action at the 2020 PGA Championship on TV and stream it online.

How to watch the PGA Championship on TV Saturday

The TV coverage for the third round of the PGA will be split between ESPN, which has aired the first two rounds, and CBS. ESPN will get the TV action started with three hours of coverage on Saturday beginning at 1 p.m. ET. CBS will then take over for the heart of the broadcast to follow the leaders for six hours, from 4-10 p.m. ET.

How to watch the PGA Championship online Saturday

Early coverage of Saturday’s third round will be available exclusively on ESPN+. ESPN+ will stream two hours of coverage from 11 a.m.-1 p.m. ET, before the action switches to TV. You can also catch Featured Group coverage all day Saturday on ESPN+, along with Featured Hole coverage of the 18th hole.

Both the ESPN and CBS TV broadcasts can be streamed online at ESPN.com/watch and CBS.com/all-access by signing into your account or using an active cable subscription.