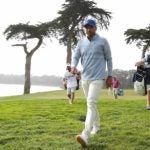 The 2015 PGA champ, Jason Day, is looking for his second major title this week.

Haotong Li leads, Brooks Koepka is lurking and much more has happened after 36 holes at TPC Harding Park. Who, or what, has been the biggest surprise at the halfway point of the PGA Championship?

Michael Bamberger, senior writer: Must we limit ourselves to one? The Frenchman. The wind on the flags. The beauty of the course. The way the tee shots require the players to hit fades, draws, high ones, low ones. The pleasure of watching West Coast major-tournament golf on an East Coast TV. But the Frenchman. Talking ‘bout you, M. Lorenzo-Vera.

Sean Zak, senior editor (@sean_zak): Haotong Li (really, all he’s doing) shooting 65 while hitting just four fairways Friday. The rough is quite penal out at Harding Park. You’re not supposed to be able to score that well when you don’t drive it straight. Mad props.

Josh Sens, senior writer (@JoshSens): Tiger Woods gave us a double dose of the unexpected. First, on Thursday, by looking loose and limber in the kind of cool conditions that are now supposed to be his Kryptonite. And then again today with uncharacteristically balky putting, compounded by a costly mental error or two. That 8-iron approach he airmailed on 15 was about as un-Tiger a short iron as you’ll see.

Alan Bastable, executive editor (@alan_bastable): Harding Park. No, it’s not Augusta National or Oakmont or even Chambers Bay, but it has forced guys to hit a far more diverse arsenal of shots than I would have guessed. Stinging irons, bump and runs, big flops. It’s been fun to watch. And blessedly, the bomb-and-gougers aren’t having their way. Even Bryson hit a hybrid (!) off the tee today. “I can’t really let it rip out here this week,” he said. “Not to the full extent. I feel like the rough is too penalizing.” Good on ya, Harding.

James Colgan, assistant editor (@JamesColgan26): Tommy Fleetwood — and not only for his insistence on wearing cardigans. It’s easy to forget that Tommy Flo has played in only two events on U.S. soil since March, one of which was a dreadful missed cut at the 3M Open. Now he’s tied for third heading into the weekend at golf’s first major in 13 months.

Jessica Marksbury, multimedia editor (@jess_marksbury): Jason Day. He was about as under-the-radar as you can get for a former champion and one-time World No. 1, even though he gave us notice of a resurgence with three top 7s in his last three starts. Now, despite a so-so 69 on Friday, he’s still squarely in the mix, just two shots out of the lead.